Eating healthier at the theme parks 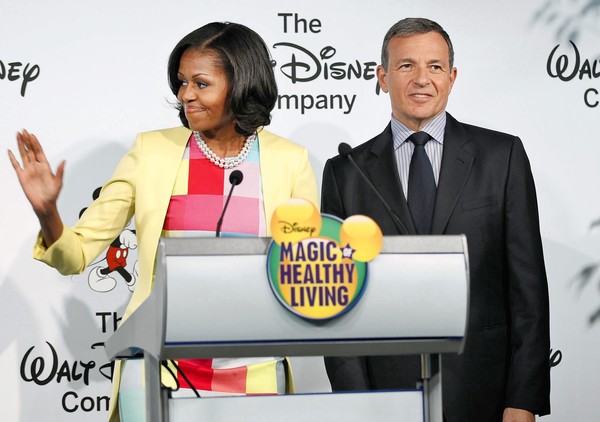 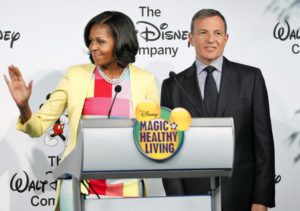 Let’s hear it for Mickey Mouse.

Order a kid’s meal at a Disney park and you get apples instead of fries (unless you ask for fries) and low-fat milk rather than sugary soda. Of the more than 12 million kids meals served last year at Disney Parks and Resorts in the U.S., parents stuck with the healthier options six out of 10 times.  Now Disney will enhance these efforts by further reducing sodium in kids’ meals and introducing new well-balanced kids’ breakfast meals.

This is all part of a broader initiative just announced that makes Disney the first major media company to introduce new standards for food advertising on programming targeting kids and families.

“The emotional connection kids have to our characters and stories gives us a unique opportunity to continue to inspire and encourage them to lead healthier lives,” said The Walt Disney Company Chairman and CEO Robert A. Iger  in announcing this initiative recently, First Lady Michelle Obama at his side.

With her Let’s Move! Campaign, The First Lady has made combating childhood obesity and encouraging families to eat healthier her signature issue.    “This new initiative is truly  a game changer for the health of our children,” The First Lady said.

Let’s hope so.    As families head to Disney and other parks this summer, it’s important to note that there are far more options than we might think or that were available when we were kids.

Sure you can still get churros, burgers and fries and all the ice cream you want, but you can also get fresh salmon and rotisserie chicken at LEGOLAND Florida, where there is an entire new exhibit, complete with LEGO characters about farming and where our food comes from. Kids menus include salads, wraps and fresh fruit. And I love that kids can play at giant LEGO tables at the restaurant..

That’s not to say you still won’t find a plethora of mac and cheese and chicken fingers at theme parks. But at least there are other choices. At Sea World Orlando’s Sharks Underwater Grill, there’s a steak kabob on the kid’s menu and at Universal Orlando’s Three Broomsticks restaurant in the Wizarding World of Harry Potter, kids get grapes or apple sauce with their meal, though they could also opt for a turkey drumstick from the adult menu.

Nearby at Downtown Disney, Kids chowing down at Wolfgang Puck Cafe can choose California rolls made from ham and cheese while the Italian restaurant Portobello offers whole-wheat cheese pizza and the kids’ menu at Fulton’s Crab House  includes crab legs and fresh fish. .

We all know the dismal childhood obesity statistics: 1 in 3 children are overweight or obese. But whether a child is overweight or not, it’s certainly not healthy to eat a steady diet of fried and fat-laden foods on vacation.

Nor do kids—or their parents want that food. Some families opt to make their own breakfast (many hotels now have fridges in the rooms) and   brown bag theme park lunches—cheaper as well as healthier—and bring reusable water bottles.  When they opt for restaurants, many look for meals and menus  that will enhance the vacation experience.

“These kids know a lot more about food. They all watch the Food  Network,” observes  Andrew Sutton, the well-known Disney chef who oversees Napa Rose at the Grand Californian Hotel and the just-opened Cathay Circle Restaurant and Lounge at Disney California Adventure. He encourages families to share and try new foods—maybe a summer watermelon salad or bacon-wrapped shrimp?

“The big trend is what’s in season, and what’s in season always tastes better,” adds  Executive Chef Bill Orton, who oversees the children’s menus at the Disneyland parks and hotels. Kids, he adds, are eating more fruit, vegetables—even broccoli—and whole wheat pasta. “As they get older, they want to eat what their parents are eating,” he said.

“We don’t even have chicken fingers on the kids menus,” he said.

Let’s keep it that way.