From Venice to Croatia, Sicily and Rome in 10 days 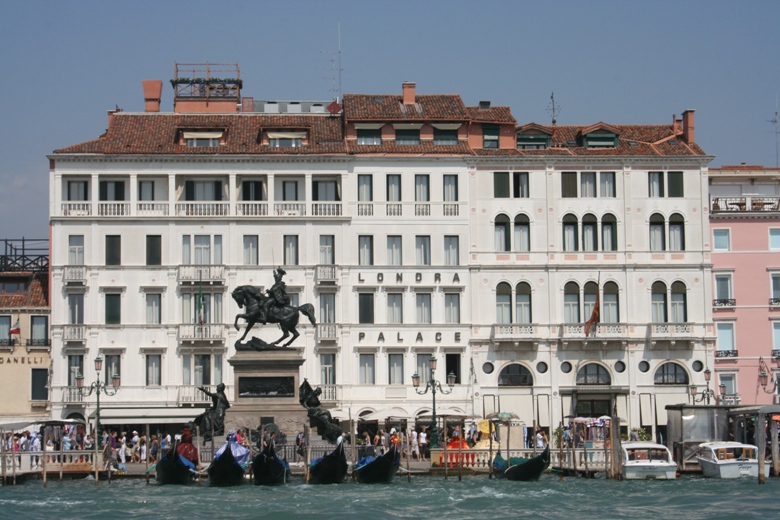 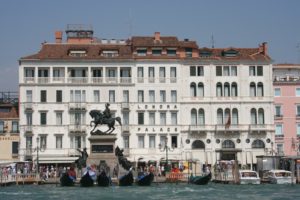 We succumbed to the sales pitch for a gondola ride on Venice’s Canals (80 euros for the 110 euro tour, the salesman in the bright red striped shirt promised, but our gondolier didn’t sing—or talk much either. I don’t think he spoke much English.

Still it was fun gliding on the narrow canals past Marco Polo’s house, Mozart’s House, the famous Bridge of Sighs (legend has it, I read in my Frommer‘s Day by Day—a great pocket-sized guide—that the bridge takes its name from the sighs of prisoners stealing their last look at freedom before making their way to their cells from the Doges Palace and of course the Grand Canal.

We are staying nearby at a wonderful small 53-room hotel The Londra Palace that is walking distance to all of the great sites. Of course you can walk everywhere in Venice or take a boat.  Our first mistake: to opt for the much cheaper (30 Euros for both of us) Alilaguna public boat from the airport rather than a private water taxi (80 to 100 euros). Sure it was a lot cheaper but it took three times as long (an hour and a half) and was hot… sometimes cheapest isn’t always best. But it dropped us off at San Zaccaria, (one stop from San Marco) and literally in front of  our  hotel.

Sometimes a hotel is just a place to sleep but it also can be part of the experience of travel. I  love the small intimacy of the Londra Palace, our decorated ceiling painted in gold leaf and black squares and eating dinner on the terrace—Ristorante Do Leoni–watching the world go by.  We feasted on homemade pasta with sardines, capers and olives and homemade ravioli and all kinds of seafood (Adriatic mixed fish grill, baked turbot, fried scampi, squids and veggies.)  I loved having breakfast (cappuccino of course0, sitting on the same terrace watching the huge crowds of cruise ship passengers go by. (The Londra Palace was recommended by Ciao Bambino, a great site to find places to stay and things to do with the kids in Italy.)

Our guide Susanna Rodigheiro (email her:susanna.rodighiero@alice.it) could design and individual itinerary for any family that not only is cheaper (typically 70 euros or about $105 an hour) than a large cruise tour, more geared to the kids’ ages (how about a mask-making workshop?) but a lot more relaxing than being stuck in a large group.

I’ m glad to let her lead the way.  Sadly, she tells us, few tourists venture far from St Mark’s Square “to the real Venice.”

The Piazza San Marco, of course, has been the heart of the city for more than 1,000 years but is so clogged by tourists that locals don’t even go there she tells us after we meet in the morning.

Her assignment:  Get us away from the crowds!

She explains that for a small city of 60,000 people, Venice is now welcoming some 21 million visitors a year—the same as Florence. “There are few jobs if you aren’t involved in tourism,” she says as we walk the narrow cobblestoned streets where there isn’t a tourist in sight—just a child on a scooter, an elderly woman rolling a shopping cart, men gathered at a bar for an espresso.  Laundry hangs out of many windows— and over the canals.  “No one has driers,” she says. “Electricity is too expensive!”

We see one of Venice’s oldest churches—there are 110 (there were over 200 until Napoleon destroyed them) dating back to the 1400s. Kids would like seeing how the design changes after one story—because the nuns changed architects!

What’s with the elaborately decorated masks everywhere in shop windows, we ask. They come from the tradition of Carnival that dates back hundreds of years. In those days, people would dress in hats, long black coats and white masks so they wouldn’t be recognized.  “Everyone could try on someone else’s life,” she said.  In the 18th century, the partying would last for months… until Napoleon ended it.

Today (it was just brought back in 1979), Carnival lasts for 10 days, just before Ash Wednesday, and is a lot more like our Halloween, especially for children with special treats, and puppet shows. We see all varieties of masks—glittered, gold, purple with feathers  and those with the long hooked nose doctors wore to protect themselves in times of plague (half the city died in 1430, some 70,000 people).  We see little girls clutching turquoise ones as they tour the streets.

I’m still trying to wrap my head around the idea of city where there are no roads, where people keep their cars in large lots outside and get around either on foot or by public boats—kind of like subways on the water. “Everyone walks and you meet people you know everywhere you go,” Rodigheiro says.  In the old days, wealthy families had their own gondolas, she said. The famous Peggy Guggenheim was the last to have a gondola in the 1960s and she was known for her flamboyant style as well as her art collection, which we visit later in the afternoon at the Palazzo Venier dei Leoni, what once was her spectacular villa overlooking the Grand Canal and now houses the Peggy Guggenheim Collection. She is buried in the garden with her dogs.

I try to imagine dinner parties with the modern masterpieces on the walls–Picassos and Miros and Braque, Kandinskyand Klee.  Kids would love this museum because the art is so arresting.

Peggy Guggenheim first opened a gallery in London in 1938—in some cases buying a picture a day. When the Germans approached Paris, she returned to New York and exhibited her collection of Cubist, Abstract and Surrealist art.  In 1947, she returned to Europe and to Venice where she bought her Palazzo.

During her three decades in Venice, she continued to help artists and buy art. Today theGuggenheim Foundation has converted and expanded her house to one of the finest small modern art museums in the world.

Rodigheiro took us to the Arsenale in the eastern Castello district of Venice –again not a tourist in site—and I try to imagine what this must have been like in the 1500s when 5,000 people worked here building ships.  Today the buildings with their Greek statues of Mars and Neptune and giant lions are owned by the Italian Navy.

Nearby is Museo Storico Navale, a naval museum that is a hit with kids.

Rodigheiro often guides American families and says with kids the key  “is to do little bits of things….a boat ride… a gelato… climbing the bell tower (instead of San Marco,  take kids to the San Giorgio Maggiore and climb the bell tower there, she says—cheaper and fewer crowds!)

We peek into tiny gardens. “I wouldn’t live anywhere else,” she tells us. “There is art everywhere.”

We go across the Grand Canal like the Venetians do—standingin a Gondola for 50 cents. There are only three bridges and perhaps a half dozen boats that ferry Venetians and tourists across. We stop at the famous Rialto market (A good place for inexpensive souvenirs) with stands selling everything from masks to belts to refrigerator magnets. But be careful she warns us—some might be made in China.

We stop at a Bacaro for some small sandwiches and a glass of wine… We congratulate Alessandra de Respini on her tiny sandwiches… tuna and shrimp and pistachio cream, gorgonzola cheese, smoked salmon and asparagus.

We point an the genial guy behind the counter gets them for us.  Enoteca Cantinone “Gia Schiavi” –a wine shop with Italia-style Tapas is a high point of our day. Some police officers come in for an espresso. We eat standing sipping our wine—more for adults than kids, though they won’t go hungry with pizza and gelato on every corner.

“People don’t spend enough time in Venice,” Rodigheiro sighs. “There is so much to see!“

We end the day at a small typical Venetian Restaurant Mascaronthat she had recommended—one we never would have found on our own where we share a table with a young couple from Rome who have never before visited Venice.

We feast on a selection of fish—sardines, octopus, cuttlefish, sea bass, all prepared differently—fried, sautéed, breaded… all delicious followed by the best pasta and clams I’ve  ever eaten, all washed down with the house wine. Not only was the restaurant inexpensive, it was a memorable meal—exactly what you hope for in a foreign city.

Next:  Ready for a scavenger hunt?