Kids will love the sights and sounds and stories of Venice 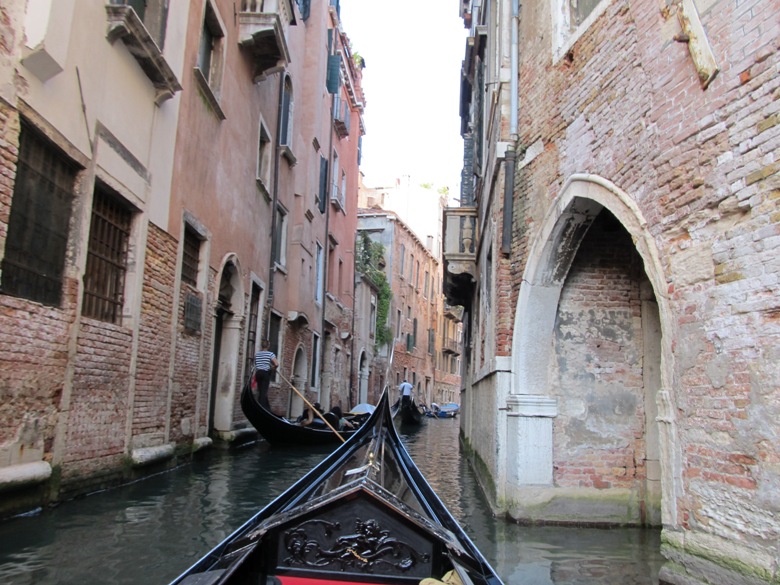 Ready for a scavenger hunt?

You wouldn’t think Venice’s august Doge’s Palace and the Basilica San Marco, both filled with centuries-old art, would be a good place for a scavenger hunt but that is actually a perfect way to get the kids engaged. That and promises of gelato and a gondola ride afterward, of course. 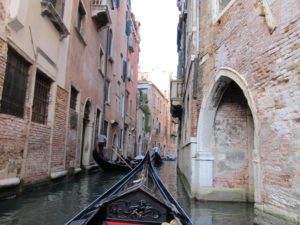 Right up until the 1960s, wealthy families had their own gondolas. The flamboyant Peggy Guggenheim used to tool around town on hers. She, of course, is revered here for her spectacular art collection housed in the Palazzo Venier dei Leoni, where she lived overlooking the Grand Canal and which now houses one of Europe’s premier museums dedicated to modern art (http://www.guggenheim.org/venice).

Luisella Romeo (http://www.seevenice.it/seevenice/tour_guide_in_Venice.html), an official tour guide who often shows families the sites, says with kids in a city like Venice, it is important to “pick and choose what you see. You can tell them all the dates and the history,” she adds, “But they won’t remember any of it without the stories.”

Once inside the famous Basilica, for example, kids will love the creepy story told in mosaic of how Venetians supposedly stole St. Mark’s bones from Egypt, hiding them in pork (the painting even depicts the inspectors holding their noses), but then the church took so long to construct, they forgot where the bones were hidden. A miracle supposedly led them to the bones, though the tomb is actually empty.

At the Doge’s Palace, look for the special secret mailboxes — there are 72 — where citizens would list allegations against their neighbor. It was up to the judges to decide if your grievance had merit. If you were wrong, you were punished. (How would the kids like that system the next time they complain about a sibling?)

The key “is to do little bits of things … a boat ride … a gelato … climbing the bell tower suggests Romeo’s colleague Susanna Rodighiero who specializes in American families and takes us on the back streets away from the crowds. Too many visitors don’t get far from Piazza San Marco, she says. It’s so crowded with tourists locals don’t even go there anymore.

The right hotel helps too. We are staying nearby at a small 53-room hotel, the Londra Palace, which welcomes many families with connecting rooms and a terrace where we eat breakfast watching all the action on the waterfront — the water taxis and buses, the gondolas, the tourists and locals making their way. For a small city of 60,000 people, Venice is now welcoming some 21 million visitors a year — the same as Florence and, according to American Express, is more popular than ever with double-digit increases this fall in flights to Venice and hotel bookings.

Skip some of the churches in favor of some interactive activities, like a glass-blowing demonstration in Murano or a mask-making workshop. Venice, of course, is known for their fantastic carnival masks (we see children clutching theirs as souvenirs) — turquoise and purple, with feathers and gold glitter — a lot different from the traditional white ones that were used centuries ago to mask a Venetian’s identity as he or she partied in the city. If you are visiting this fall, check out the Venice Biennale the major contemporary art exhibition that takes place just once every other year.

(TIP: A guide like Romeo or Rodighiero (email her at susanna.rodighiero@alice.it) could design a special family itinerary for about $105 an hour. You not only can skip the lines but also relax, letting an expert lead the way, saving significantly, as compared to booking a cruise ship excursion. (The website www.ciaobambino.com can also help you plan a trip to Italy.)

As we walk from the great sites on impossibly narrow streets to small neighborhoods where kids are riding scooters, elderly women are rolling shopping carts and men are sipping espresso in the square, I’m still trying to wrap my head around the idea of a city where there are no roads. The city is made up instead of 121 islets linked by 435 bridges.

“I love that there are no cars, just boats,” says 11-year-old Allison Kojima, visiting with her family from Seattle. Besides the gondolas and the gelato, her favorite Venice experience so far was hanging her laundry outside the apartment her parents had rented, just as locals do, often across the canals.

The Doge’s Palace, meanwhile, summarizes the entire history, politics, art and institutions of the Venetian Republic. It was as though, Romeo tells us, the White House, Supreme Court and Congress were all contained in one building — one that is 1,200 years old.

We climb the Golden Staircase with its 24-karat gold ceiling. Can kids find the carved masks of imaginary animals?

They’ll love the room with the globes and painted maps of the world, as it was known 500 years ago. America is upside down! Ask them if they’d want to leave home at age 15 to travel the world, as Marco Polo left Venice with his dad and uncle.

Look for the child-sized armor and the huge weapons and see which ones they can spot in Tintoretto’s famous battlefield paintings.

Walk across the famous Bridge of Sighs in the Doge’s Palace where it is said prisoners would get their last view of freedom before incarceration. Take a moment to peer into the cells.

(Depending on when you visit, you can sign up for “Secret Itineraries” tours of the Doge’s Palace (http://www.tickitaly.com/tickets/itineraries-tickets.php) that include up-close looks at passageways and rooms not always open to the public. If you are visiting on your own without a guide, book your tickets ahead for the Doge’s Palace and the Basilica San Marco to avoid lines that can stretch longer than an hour. Log onto www.venice-museum.com.

Next door at the Basilica San Marco, kids can’t help but be impressed with the shimmering gold mosaics. They took 400 years to finish and cover 91,000 square feet. We see evidence of Venice’s flooding problems first hand. At high tide, water seeps into the church. From the upstairs balcony, we can see the stunning mosaics close up and the famous horse statues stolen from Constantinople. They are 1,600 years old and look so real.

We go across the Grand Canal like the Venetians do — standing in a gondola for 50 cents, stopping for souvenirs at the famous Rialto market.

By the end of the day when we land at a small out-of-the-way restaurant, we’re beat — and happy. Certainly touring historic churches and museums isn’t easy for kids — or grown-ups either, especially in a foreign country. But the right approach can make all the difference.

So can plenty of gelato.

(For more on Eileen’s trip to Italy and Croatia, read her travel diaries)