Gladiators, churches and fountains – a day in Rome 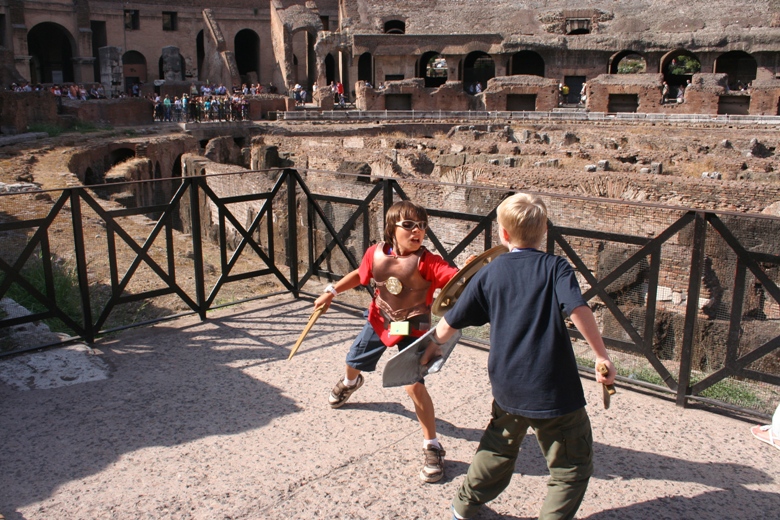 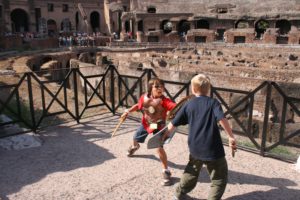 DAY EIGHT — The Gladiators are really going at it.

Everyone is watching. We’re in the ancient Coliseum in Rome but these gladiators won’t fight to the death, thank goodness. They’re not slaves or prisoners of war.

They’re the kids whose parents have signed on for Adventures by Disney (www.adventuresbydisney.com), a new program offered on the Disney Magic (www.disneycruise.com) in the Med.

There are 13 families, including three grandparents and three couples without kids, being treated to exclusive excursions, quick access to sites with long lines like the Sistine Chapel and the Coliseum and a lot of handholding (they even gave us the coins to throw in to the famous Trevi Fountain and coupons to buy gelato nearby).  This makes traveling with kids in Europe a lot less stressful and a lot more fun—albeit at a steep price (Over $10,00 for a family of four.)

While the adults are enjoying a tour of the Coliseum, the younger kids—who range from age four up to 18 in this group—are decked out in plastic shields, helmets and wielding plastic swords are “fighting.” The boys are going at it pretty good. “Boys fight while girls hug it out,” observes 10-year-old Francesca Boerio.

I’m impressed that at the end of a very long day touring Rome in the heat—starting with a 1.5 hour bus ride from the port of Civitavecchia, a visit to the Sistine Chapel, St Peter’s Basilica, the Spanish Steppes and the Coliseum– that the kids are still smiling and laughing—though very  tired—at 5:30 p.m.

Even when four-year-old Elle Zais, the youngest in our group, has a meltdown at the Coliseum, our stellar guide Courtney Robicheaux gets her smiling again and then the older girls in the group took over entertaining her.

That’s what happens when you tour every day with the same group.  “We turn into one family,” says our other guide Jennae Champeau. Parents start watching each other’s kids; the kids form bonds because they see the same faces at dinner and on every excursion as well as some on board activities.

That’s why Francesca’s parents chose to do this despite the extra cost and that they’d already toured some of the sites on the itinerary. Because Francesca is an only child, her mom Aleli Arevalo explained, was that she could be with the same group the entire trip.

“If we were on our own, we wouldn’t have lasted nearly as long,” said Mickey Davis, traveling with her husband and two young sons. “We saw in Barcelona how hard it is to keep everyone happy all day sightseeing.”

The Adventure by Disney guides take all the stress—and the guesswork—out of it. That’s part of the fun exploring a new city when you are grown up or nearly one but not when it’s hot and you are seven or 10 or 12.

We blithely bypass long lines—even the group cruise ship entrances to the Vatican Museums–wherever we go, stop for a leisurely prearranged lunch where the kids dig in to Gelato. The guides have already presented postcards with the special Vatican stamps so we don’t have to stand in line to get them.

We get the 411 on where to find the bathrooms—much appreciated with young children in the mix. Did I mention that besides our two guides there are two local informed guides with us who can answer every question? Did the gladiators really fight to the death? (Yes!) How long did it take Michelangelo to paint the ceiling of the Sistine chapel? (Four years.) How old was he?  (In his 30s but only 24 when he carved the spectacular Pieta we see in St Peter’s Basilica.

Some might turn up their noses at such handholding.  But if you can afford it, the experience certainly is enhanced.

The concept, explains Jennae Champeau, who has been guiding since adventures by Disney started 5 years ago, is to try to “immerse yourself in the local culture,” whenever possible, of course. “To give the   kids the experiences that will create the memories. The sites will always be there. We want to create the powerful experiences that will make you remember.”

I don’t think any of the boys and girls “fighting” each other at the Coliseum on a hot summer afternoon will have trouble remembering. Besides, they’ll have the photos –courtesy of our guides, of course—to help.