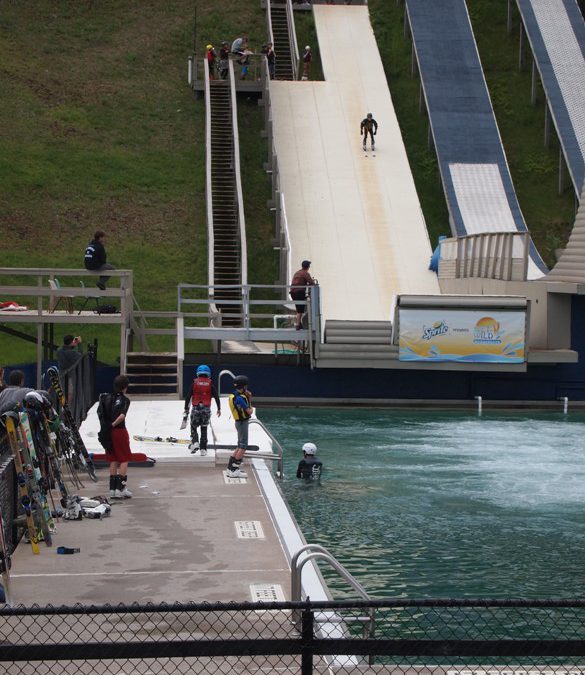 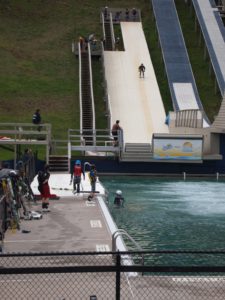 You can learn a little Olympic history in Lake Placid at the Olympic Center (www.whitefacelakeplacid.com).

Visit the Winter Olympic Museum and the MacKenzie-Intervale Ski Jumping Complex in the village of Lake Placid. The 120 and 90 meter ski jumps are the tallest structures between Albany and Montreal—offering a spectacular view.  If you’re lucky, you can watch the jumpers practice, landing on a plastic training surface ; in the Olympic Sports Park, you might catch freestyle skiers practicing—50 feet in the air—and landing in a huge (750,000 gallon) pool. The 4th of July Ski Jump has been held here for over 50 years with international Nordic Jumpers.

Athletes train year round at the Olympic Sports Complex located five miles from Lake Placid at Mt. Van Hoevenberg.  If watching isn’t enough, then you can take a wheeled bobsled ride down the Olympic run—with a professional driver at the helm, of course, on the new combined bobsled-luge-skeleton track, where you can also hike.

We met a group of kids from Ontario who had driven six hours to train here, honing their  ski tricks in the air and landing in a pool rather than on snow—a pool filled with lake water that is just 42 degrees, laughs one of the moms and chaperones, Lousie Mceachran, whose two sons are here.” It’s safe so we can let the kids go out on their own and everyone is so friendly.”

We’ve certainly found that touring with our pooch Trooper who can’t go half a block without a pet from a passerby or a treat.

We also headed up to the top of  the ski  jump first by chair lift and then elevator—253 feet high where we were treated to a 360-degree view of the surrounding mountains.  But my favorite part of the day was just in sight from the top of  the ski jump at the Mackenzie-Intervale Complex—we could see abolitionist John Brown’s farm and the nearby Henry trails where our dog Trooper enjoyed a three-mile hike earlier in the day as much as we did.  That’s the thing about Lake Placid–there is so much to do–Olympic History, hiking, cycling (we see lots of serious cyclists) runners motorcyclists and of course all the action on the lake.

“The kids love it here,” said Louise Mceachran and it’s easy to see why.