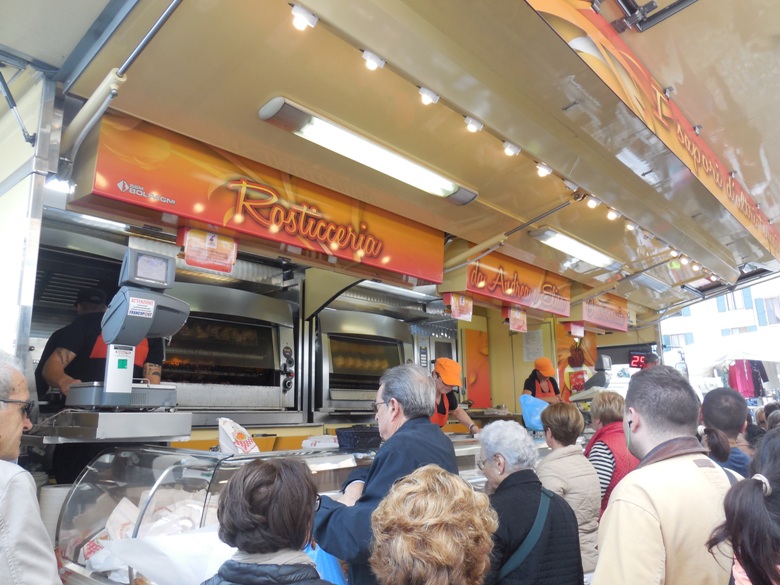 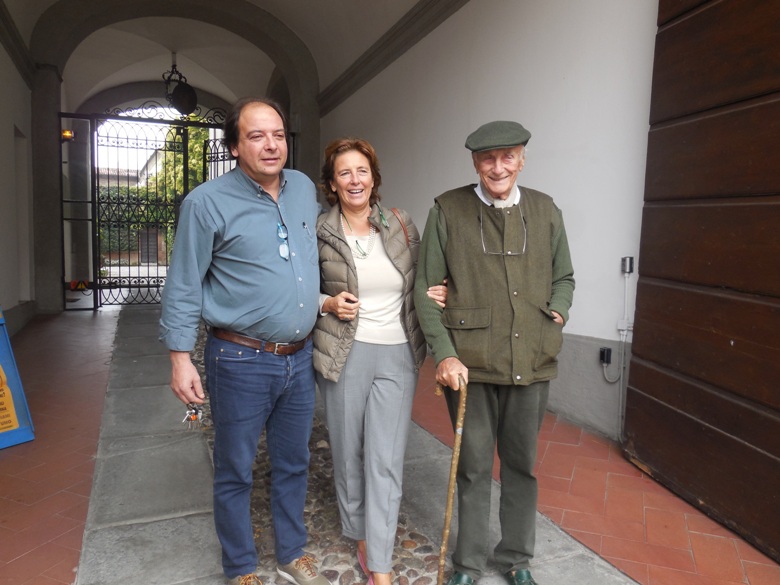 After all, I’m staying in Palazzo Castiglioni that dates back centuries, right across the Piazza Sordello from the Palazzo Ducale in the city of Mantova between Milan and Venice and a short drive to Verona.

During the early middle ages, I learn, this city was enclosed by walls and was a very famous renaissance city. “One of the best cities in Italy,” declares Roberto Tebaldio, a local tourism official. The city is famous for its renaissance buildings, its salamis (Levoni has been in business for more than 100 years), its Sbrisolona (traditional crunchy tart), authentic food like pumpkin ravioli, its palace with over 500 rooms and the fantastic Palazzo Te, a 16thCentury palace with its amazing frescoes.

“We’re like Venice without all the tourists,” local Claudio Bini told me at a cocktail party given by Luisa Castiglioni, who founded the villa rental company Este Villas and whose family owns Palazzo-Castiglioni-Mantova that dates back to 1280, the oldest palace in the city. Am I really staying here? 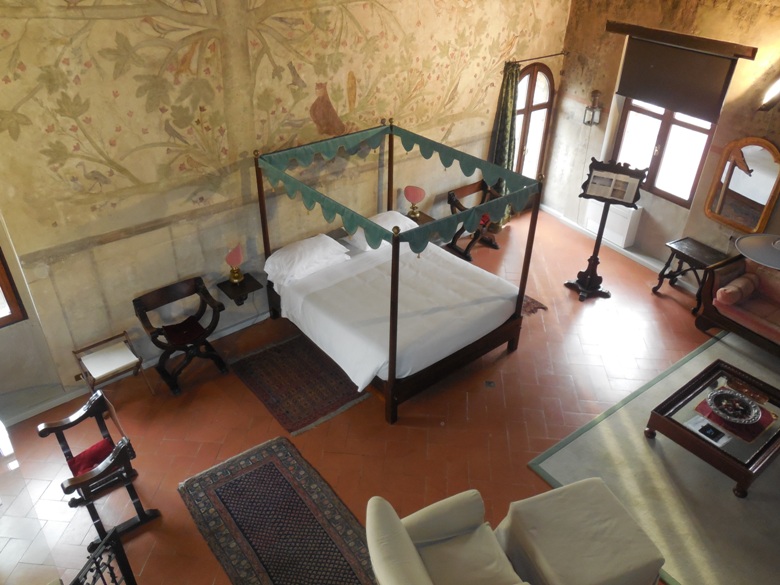 Tower room with frescoes at Palazzo Castigilioni in Mantova Italy

“Mantova is off the beaten track, which is hard to find in Italy these days,” says Kit Burns, whose company Doorways Villa Vacations specializes in arranging Italian villa vacations for Americans. “It is a place so charming, so interesting and so not over-run by tourists, that it is a pleasure to explore…Shakespeare wrote about it.”

In fact, Mantova is the city where Romeo went to buy the poison to take back to Verona.

At one time, Mantova—called Mantua in English — rivaled Florence for its beautiful art, Mantova guide Giuliana Varini told us. Sadly, the Austrians and then Napoleon stole much of the art.

“Because of this, it is not known to the world in the way Florence is,” observed Burns, who said she has a hard time convincing Americans to include Mantova in their itinerary. “But what remains?  Architecture. Frescoes!  Unbelievably wonderful frescoes.” 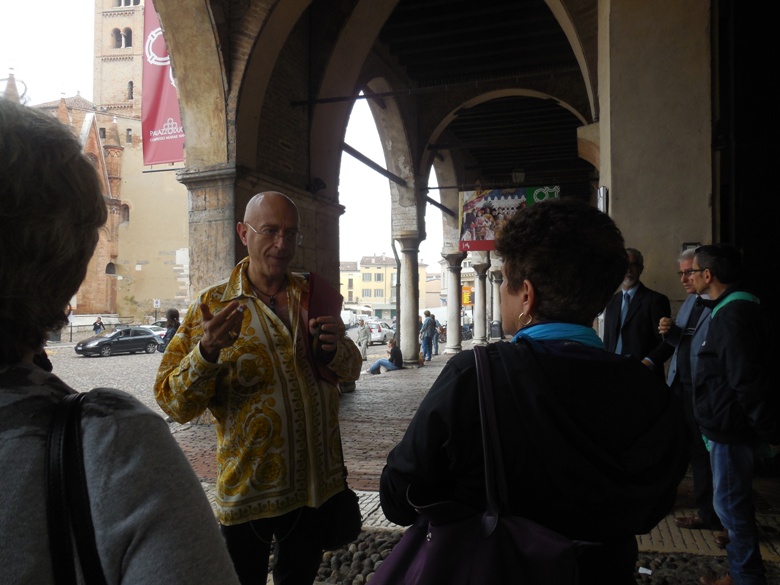 We are able to visit the fantastic “Camera Picta” painted room currently closed to the public in the Ducal Palace with huge wall paintings by Andrea Mantegna.

Castiglioni tells us her ancestor is in one of the paintings—whispering in the ear of the Marquis Ludovico Il Gonzaga.

The Palazzo Castiglione may date from the 12th Century but our room has all of the modern conveniences—WiFi, AC, walk-in shower, but overlooks the ancient plaza and ducal palace. Our cousins have opted for the “Tower Room” with a fresco dating back to 1200. We saunter down to the piazza to enjoy our morning café and croissant that is included with our room, sitting among cyclists and elderly men and women out doing their shopping—not another tourist anywhere.

All I can say is wow! I’m so glad my sister in law speaks Italian. 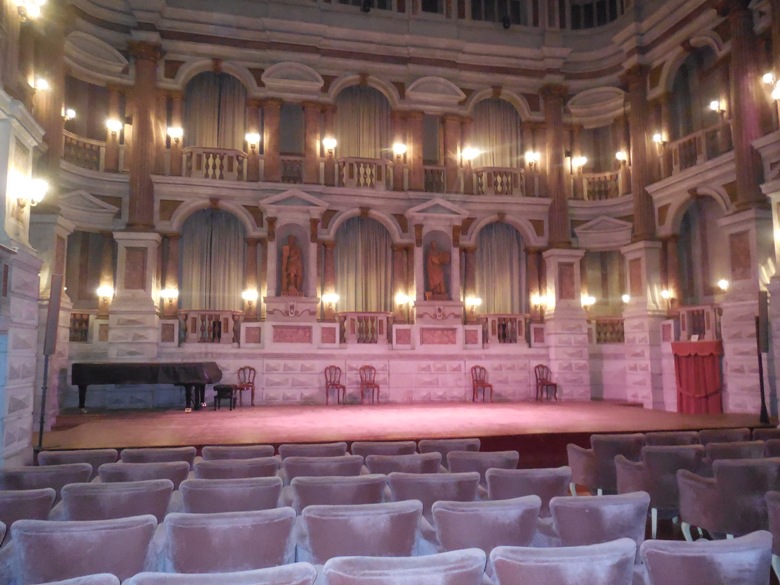 Inside the beautiful Bibiena Theater where Mozart once played

There is a fantastic Bibiena Theater — Mozart played here as a young teen just after the theater opened in January 1770 — that is home to the Mantua Chamber Orchestra (tickets start at under $20!) and a Music Festival the end of June where musicians play short pieces in some of those 500 rooms in the palace – as many as 60 just in one day, the musicians speaking to their audience in between.

Still, this town is “a little sleepy,” another local tells me. It is decidedly off the tourist track, especially for Americans.

Locals hope that will change. “Mantova is a city for cultivated tourists with fantastic food and the chance to sleep in a palace,”says Riccardo Braglia who seems to know everyone in town and is an expert on the Gonzaga family who ruled here during the 15th and 16th centuries when the palace really a private city of some 10,000 people.

“This is a beautiful Italian city with an ancient historical center that will give you a chance to immerse yourself in what was and what is.” said Burns.  “Then there is the unjaded hospitality and arguably some of the best food in Italy.”

We experienced that first-hand, trying tiny restaurants on impossibly small streets like La Porta Accanto, the more casual version of the elegant Aquila Nigra, and others that spilled out onto the open piazzas like Il Grifone Biancol or the oh-so- pretty IL CIGNO – TRATTORIA DEI MARTINI, with plenty of options for gelato and pastry and pizza everywhere we turned. Don’t miss the amazing pasta and pastry shop Panificio PAVESI –a good place to try the region’s typical Sbrisolona cookie-like pastry. Yum!

There is so much history here—dating back to Virgil’s time. He was born near here and Mantua has always been known as Virgil’s town.

But we experienced a decidedly 21st Century Mantua at the Thursday morning market sprawled across the ancient cobblestoned square, crowded with sellers hawking everything from socks and underwear to all varieties of cheeses, ham, salami, rotisserie chicken and fish and locals looking for a bargain—and their groceries.

Castiglioni, whose father Baldesar Castiglioni, 88, still has an apartment here and is the descendant of Baldassare Castiglione, the famous author and nobleman of the Renaissance whose book about court etiquette was widely read all over Europe—the bestselling author of his time.

His portrait was painted by Raphael and hangs in the Louvre near the Mona Lisa; a copy of the portrait hangs in her father’s apartment. I’m mesmerized by the very old Murano glass chandeliers—all of the colors! ALL of the shape of the glass!

“Here you have the experience and a relationship with the local people,” says Luisa Castiglioni, who is working to create a community of villa owners around Italy who can offer a similar standard of service—from luxury staffed villas to simple country cottages to Renaissance palazzos like this one where we incredibly meet the family who owns it—and has owned it for centuries. She and her brother Guido, who oversees the property, worry what will happen in the future as none of their children, in their 20s and 30s seem interested. I hope that changes. 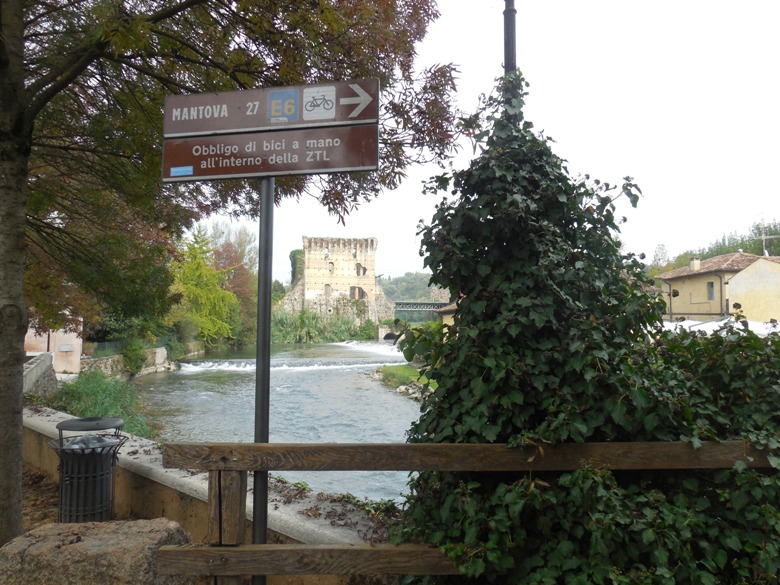 Borghetto on the Mincio River near Mantova

This has got to be one of the most unique places I’ve ever stayed with an arched sleeping alcove and views of the ancient ducal palace and the square from the big windows. Restaurants spill outside; we amble from one square to another, walking everywhere. I really feel like royalty because we are parked inside the gates and need a special clicker to open them.

She says in recent years, guests have become more demanding—most of her business is Americans “but there is no perfect villa nor is there a perfect guest!”

“We have to find the right villa for the right people –whether you want a cooking class for the kids or someone to come and cook for you. The concept is being able to connect with the customs and the people of the country,” she says.

You might shop at the local market or weekly street market for groceries and take day trips out into the country side like we did today with local Riccardo Braglia, an art historian and consultant, who took us to the small town of Borghetto on the Mincio River for a long outside lunch at Lo Stappo overlooking the water. We feasted on bruschetta and risotto with pumpkin along with other locals.

We go to the Parco Sigurta Giardino that won “Italy’s Most Beautiful Park” award last year and it’s easy to see why — miles of stone paths; 30,000 roses, and a million tulips. Let’s not forget the amazing views.

Braglia insists we not leave the area without stopping at the town of Sabbioneta, a World Heritage Site, which was built as a “model town” by Vespasiano Gonzaga in the second half of the 16th Century, planned according to the vision of the Renaissance. We visit the Teatro all’Antica, the first theater of the modern age and still used today and the synagogue—the Jewish community thrived here. Sadly, after Gonzaga died, residents moved outside the walls which may be why the town is so well preserved.

It’s really nice to be off the tourist track—or at least one not followed by many Americans.