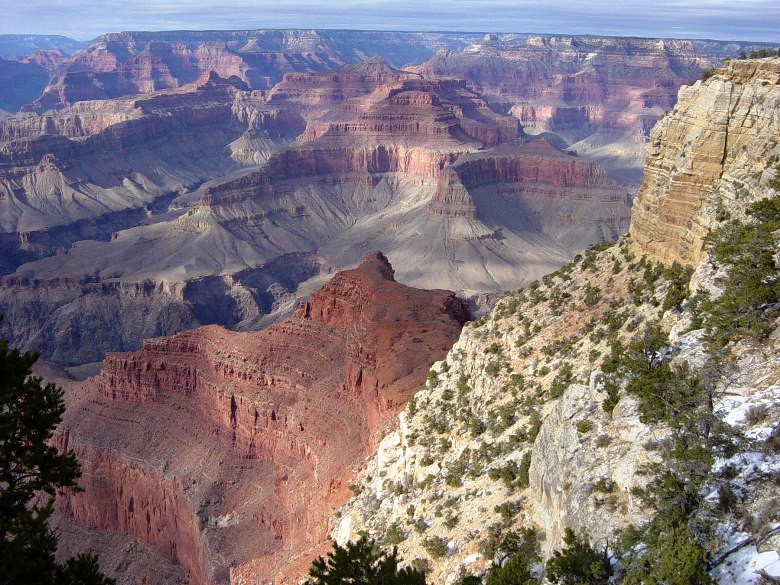 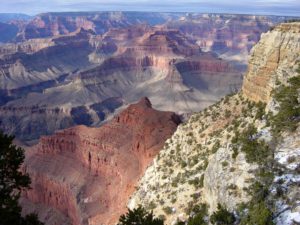 The Grand Canyon from the West Rim

Can we keep any dinosaur bones?” the boy asks the National Park Ranger Marker Marshall, who has heard this question many times in her nearly two decades at the Grand Canyon National Park (www.nps.gov). She smiles.

“This is Grand Canyon National Park, not Jurassic park,” she says, holding up a plastic dinosaur. “This is the closest you’ll get to a dinosaur!”

We’re about to go on a ranger-led fossil hunt and there are thousands of fossils to be found, she tells the crowd that includes at least two dozen kids. But there are no dinosaur bones here — these fossils are a lot older!

Besides, she adds, this is such a special place that we can’t take anything — not a rock, not a fossil, not a flower, nothing. The kids nod seriously. Many including the two I’m with  are clutching their Junior Ranger workbooks. They hope to finish the activities on this fossil hunt so they can get sworn in as Junior Rangers (www.nps.gov/webrangers).

Ranger Marshall takes us to a spot a short walk from the Bright Angel Lodge along the South Rim. It is a gloriously sunny day and families are here on spring break, they tell me.

“Getting kids outside is the most important thing for me and camping is cheap,” says Katie Dorschel, from Colorado, hunting fossils with her young sons Franklin and Sam.

First Lady Michelle Obama  certainly would agree. Let’s Move Outside Junior Ranger—part of her  nationwide Let’s Move campaign to end childhood obesity–encourages kids and their families to engage in outdoor activity that gets hearts pumping and bodies moving.

National Park Week is coming up April 16-24 (admission is free!). This year’s focus, Healthy Parks, Healthy People, highlights the connection between human and environmental health and the vital role America’s national parks play in both.

Whether your prefer a 20-mile backcountry hike in Grand Teton National Park, a stroll around the rim of the Grand Canyon , Valley Forge or touring a historic city site (check out  Philadelphia’s Independence Hall or  New Orleans Jazz National Historical Park), you are guaranteed to have a memorable time. IN fact, along the way, you’ll probably be telling your kids and grandkids stories of your first visit.

You won’t have to work to keep them interested either, I think, watching the kids clamoring over the rocks at the Grand Canyon  hunting for the fossils which aren’t difficult to find. They are everywhere — Brachiopods that look like clam shells, Bryozoans that look like wishbones, Crinoids that look like cheerios piled on top of one another, sponges that look like rock globs, horn coral that look like fingers and Burrows that look kind of like a small dinosaur bone.

Ranger Marshall has given the kids pictures and a checklist and obligingly gone around the fossil field and placed blue arrows to make it easier.

“Programs like this and the Junior Ranger program get them interested in what they are seeing,” said Sean Moriarty who was visiting with her daughters Rory and Kyra from Seattle. “It’s exciting for them to learn something and then be able to spot things left and right!”

Ranger Marshall tells the kids the Grand Canyon is like a giant history book about rock and each layer is a chapter. Where we’re standing fossil hunting, she says, is the last chapter — written some 270 million years ago! The kids nod.

The kids, especially the younger ones, are excited with their “finds.”  No TVs, no computers, no  attractions jumping out on cue. Just kids and parents discovering something new together with the spectacular backdrop.

Even 14 year old Tommy acknowledged he  was having more fun than he anticipated. “We’re studying geology in school and it was nice seeing what we’ve been studying,” he said.

“I grew up going to state parks in Indiana,” said one mom who had driven eight hours to visit from California with her kids. “ I want to pass on that experience to my kids. There’s a lot to see in the wilderness. You don’t always need a roller coaster.”

At the end of our Fossil Hunt, Ranger Marker checks the kids’  Junior Ranger books to see if they have completed the required activities. They have — even closing their eyes and listening for what they hear in the park. She swears them in as Junior Rangers and they happily pin their badges and stickers on their shirts.

“Do you promise to do your part as a junior ranger and discover all you can about  Grand Canyon  National Park?” she asks.

“Do you promise to share your discoveries and pledge to protect the  Grand Canyon  and the other parks and to be a friend of the planet Earth?”

The kids nod solemnly. They clutch their new certificates and we immediately go to buy Junior Ranger patches they can display on their school backpacks.

Now they decide, they are ready to tackle a “real” hike, below the rim, where most of the tourists here don’t go. Since we only have a couple of hours and because it is a mile — and a steep day’s hike — to the bottom, we venture just a little way down the Bright Angel Trail.

The kids are thrilled. They could have gone a lot farther, they tell us, when we say it’s time to turn back.

Next trip , we promise.