On a tour of the Med with Adventures by Disney 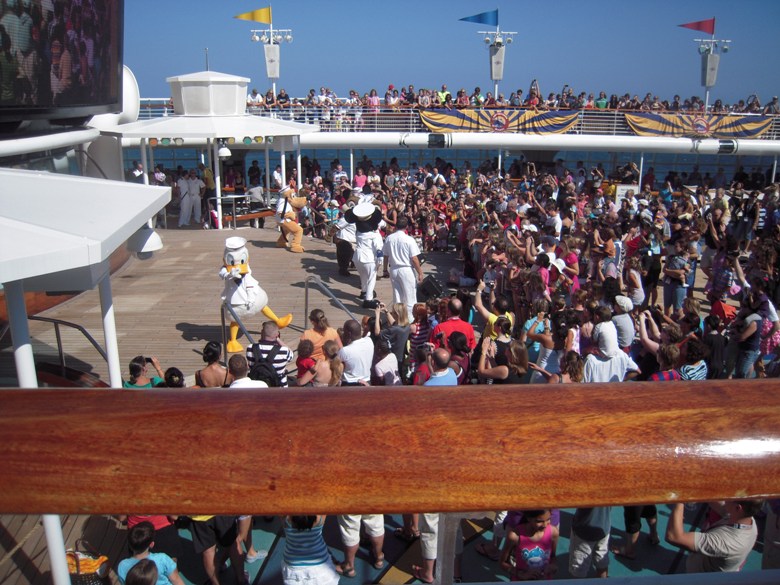 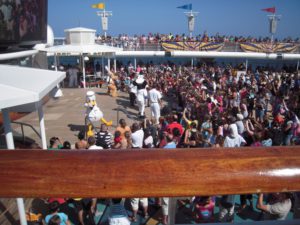 DAY ONE (Friday Aug. 9) — We arrive in Barcelona after an all-night flight and as is usual, our room at the Barcelona Pullman–great location five minute walk to the Olympic port with shops and restaurants—isn’t ready so we make the mistake of taking the two 14- year- olds to Barcelona’s most famous and iconic sight- Antonin Gaudi’s La Sagrada Familia, the unfinished cathedral that was started n 1882 and has every  variety of spires, sculptures (when was the last time you saw carvings of fruit on a Cathedral?) and more.

“Look at the line,” they complain. It stretched down the block and they don’t want to wait or seem to have any interest in touring the church.  We try the equally iconic Ramblas with its street performers—one guy levitating a foot off the ground (I have no idea how he did that) another painted “statue” going to the bathroom…they are equally unimpressed.

We hi-tail it back to the hotel where they fall asleep for the next seven hours. Teens need their sleep!

We are ensconced in a hotel with scores of others about to embark on the Disney Magic (www.disneycruise,.com)  not only  is geared for kids and teens (of the 2,800+ passengers, upwards of 1000 are kids!) but calls on ports including Malta and Tunisia.

After we get a nap too, we eat a late dinner in the port at La Fonda del Port Olimpic (www.lafondadelport.com) where we order octopus and the kids stick to familiar food like lamb chops and chicken teriyaki accompanied of course by fries.

I’m accompanied on this trip by my cousin Dana Weinberg, her 14 year old son Max and his friend Miles Singer. My mission: To see if the Disney Cruise Line  can do as good a job for teens as they do for younger kids. Can they make cities like Florence and Rome interesting to kids who prefer malls to museums?

Before we board the ship in the morning, we head to La Bouqueria Market with its hundreds of stalls selling every variety of fish, spices, meat, fruits, smoothies and gummies . I tempt the kids, telling them that there will be more than 500 varieties—lips and snakes, raspberries and eyeballs, octopus and letters. There is marzipan shaped like carrots and watermelon, silver and gold m&ms, ostrich eggs, glistening fish (conch and razor clams, baby octopus and lobster) anchovies of every variety, all kinds of fresh juices- carrot, peach, raspberry, pineapple, coconut, kiwi…)  So fun to mingle with the locals and imagine what I would buy if we were staying in an apartment nearby!

By noon we’re headed to the Disney Magic which is full to the gills with families of every variety with infants and toddlers as well as newly minted high school grads and grandparents, many of whom are Europeans. Nearly 1,000 of the 2640 passengers on board aren’t Americans—a  change for the Florida-based cruise line since they last sailed the Med in 2007.

There are also more younger kids than I would have expected on a cruise with such a  heavy sight seeing itinerary  including Naples (Pompeii) Rome, Florence, the French Riviera and more.  IT turns out that 344 of the 1050-plus kids on board are seven and under –55 are two and under (Disney has one of the few nurseries at sea that accepts kids as young as three months.)  Of course there are also 269 teens on board and a whopping 735 tweens between 10 and 12 and another 176 eight and nine year olds. That means that over 40 per cent of the passengers on board are kids!

We’ve signed on for the Adventures by Disney program (www.adventuresbyDisney.com ) which for the first time is being offered on a cruise ship. Disney had inaugurated the program five years ago with signature upscale escorted tours for families in Europe and now has expanded to the ship. That means we ‘ll explore the ports with the same two guides and dozen families from across the country, heading out on some unique adventures, promised one of our leaders Courtney Robicheaux from Louisiana who  greets us with typical Disney enthusiasm, backpacks and a promise that the trip will be as stress-free as she can make it.

The design of the cabins is great with split bathrooms that have a shower and sink in one and a toilet and sink in another , with a surprising amount of storage. I meet a lot of families of five who are sharing one cabin.  We meet our steward Efren Diokno, who has been sailing with Disney for 11 years,  –away from his family for six months at a stretch. “The hardest part is being away but we need the work for the family,” he tells us.

We’ll be underway in a few hours..Will the teens be excited by the Great Sites? Somehow, I doubt it.

There are 48 adults…nine teens and 12 kids 12 and under in our Adventures by Disney group. Two families are traveling with grandparents including one celebrating an 80th birthday and three couples without any kids at all.   There is even one group that just cruised the Baltic with Disney and is back for more!

Most cruise lines have concierge or VIP services. But Adventures by Disney is different. It’s  traveling with strangers who quickly become extended family, who explore differently than other shore excursions and share meals as well as some special  activities on board (A wine pairing dinner at the adult-only restaurant Palo, a lesson in animation complete with appearance by Pinnochio.)

“It’s all about the story,” says co guide Jennae Champeau, who has been with Adventures by Disney since its beginning. “It’s the little places those stories that need to be told…”

We get Swag—backpacks, pins and more. But more important, is we get personal attention.  For Jeannette and Mark Smith traveling from Dallas with an 11 year old daughter and 10 year old son, it is their first trip to Europe but 3d Disney Cruise(more than half the passengers on board are repeat Disney cruisers—some have cruised as many as 10 times!)

“We wanted to do it with the kids and not have to think!” Jeannette Smith told me at our get to know each other meeting complete with good eats.

For  Kimberly and Tom  Zais,  also from  Texas  and attempting to see these sites with their six year old  and four year old daughter as well as grandparents Randol and Janet Gilmore, “we just want to go and have a good time and not have to plan,” said Kimberly Zais.”If you are going to travel with kids,” this is  the way to do it. I like when other people take me and I don’t have to think about getting there!”

“What I like is you don’t have to stand in line for anything,” adds grandma Janet Gilmore.(Did I mention we will be able to avoid lines at sites like the Sistine Chapel and the Coliseum?)  “And with little kids, Disney knows what they are doing.”

Such VIP treatment doesn’t come cheap—The ship  Adventures by Disney costs roughly $2159 for kids four to 11 and $2399 for adults but these families say if you were to opt for shore excursions that can cost  $200 0r more a person  at seven ports, this is well worth it—not only for the experiences and the VIP treatment (photos everywhere we go, all onboard photos and tips included ) but for the chance for the kids to spend the entire trip with the same group. “It makes it so much easier < says Joe Boerio, whose 10 year old daughter Francesca is an only child. It would be much harder for her to connect with kids on other shore excursions, he added.

“I did the Math,” said Lori Degliantoni, from Northern California who is traveling with two teenaged nieces.  “This was better financially when you figured in all the shore excursions, the tips and the extras.” Besides, she added, “It is a lot easier for me. The girls haven’t been to Europe before and I wanted to do as much as I could.”

“This is absolutely grandparent heaven,”  adds  Janet Gilmore, who later will note how much easier the trip becomes with her four and six year old granddaughters as the teens and tweens in the group amuse them everywhere we go. “Built in babysitters,” she jokes.

We check out the “welcome aboard” show which is a teaser for what is to come- magic, comedy, Broadway style music.  I think the Gilmores are right. Disney does know what they are doing!

Our first dinner is at Lumiere’s. The  way it works on this ship is we alternate among the three restaurants and our wait staff travels with us. The Adventures by Disney Group is seated together and we share a table with Lori Degliantoni and her nieces Jenn Davidson,17, and Gina Dagliantoni,18. The trio are celebrating Gina’s high school graduation.

Lori Dagliantoni from San Carlos, CA is a true Disney fan—she not only goes to Orlando often but cruises often with her nieces and nephews. She’s already got her next two cruises booked, she said. “I tell them it’s for them but it is really about me,” she jokes.

Susan Bridges is traveling with her two teens and friends and is sailing for 31 days—three back to back Disney Cruises and opted for Adventures by Disney because they did a land trip a couple of years ago that was a resounding success.  We will also be joined by local guides wherever we go.  “We  will be joined by local guides. “We’ll get the local perspective and flavor.”

“Having someone else in charge of everything is really appealing,” agrees Shelley Morley, who is traveling from Los Angeles with her husband and three daughters 16,14,12 as well as her father celebrating his 80th birthday and is more than happy to let the Adventures by Disney guides do all the heavy lifting because, she explains it is usually the moms who do all the work of vacation  planning. “This is relaxing,” she said.