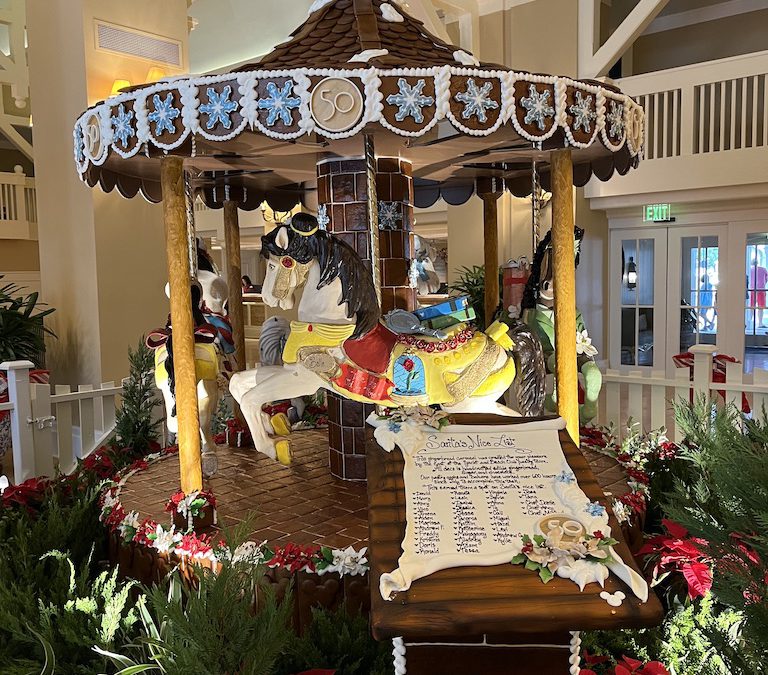 You don’t need an expensive gingerbread-making kit. But you will need duct tape, sturdy cardboard, modeling chocolate, plenty of small festive candy pieces and lots of imagination. That’s how the pros do holiday gingerbread displays.

“Push yourself to do something out of the traditional gingerbread house,” suggested Michael Craig, the pastry chef at Walt Disney World’s Animal Kingdom Lodge. He was giving us a lesson as he worked on a 7-foot-tall Ginger-Affe, who would be joined by a three-foot-tall baby gingerbread zebra in the resort lobby.

Build your pet, or the one you wish you have, or your dream car or boat. How about a ski lodge or house in the tropics you’ve visited, or an igloo, perhaps, or a scene from your favorite story?

For the uninitiated, Animal Kingdom Lodge is designed to make you feel (and believe) you are in Africa, complete with views of four savannas with more than 200 hoofed animals (yes, giraffes among them) and birds. There are also zebras, gazelles, kudu and flamingos.

The animal heads, Craig said, are the most difficult part. The Ginger-Affe was first made last year; the zebra is new. “It’s a challenge,” he said. “But I like a challenge.”

We were staying at Walt Disney World’s Beach Club Resort where a gingerbread carousel — yes it turns, and the candy-colored horses are named for Disney princesses — elicits oohs and aahs from guests. The ingredients are spelled out in gingerbread — 432 pounds of honey; 1,200 pounds of rye flour; 100 pounds of eggs; 25 pounds of spices, 10 pounds of simple syrup; 200 pounds of icing; 10 quarts of egg whites; 100 pounds of confectioners’ sugar; 50 pounds of dark chocolate; 200 gum paste flowers; 20 pounds of Grand Marnier and “lots of enthusiasm”. There are 2,021 pieces of gingerbread and 22 hidden Mickeys for guests to find.

Once you make your cardboard or wood frame; you cover it with wire mesh and then duct tape, which comes in many colors. You paste your gingerbread pieces to the duct tape with frosting (figure one egg white to a pound of confectioners sugar). The less egg white, the thicker the paste. The Ginger-Affe, in case you are wondering, will take 84 pounds of gingerbread cut into giraffe spots and then, the white duct tape covered with modeling chocolate.

The Grand Floridian, Contemporary and Beach Club resorts also feature giant Gingerbread structures — the Grand Floridian’s giant house has been a holiday fixture for more than two decades. Some fans do a self-guided tour of the resorts to see the gingerbread creations if they visit during the holidays.

On the West Coast at Disney’s Grand Californian Hotel & Spa you will see a giant gingerbread replica of the hotel standing seven feet tall and 12 feet wide.

Gingerbread houses, of course, are as much a holiday tradition for many as holiday lights and trees. Food historians believe gingerbread was first baked in Europe at the end of the 11th century, when returning Crusaders brought back the custom of spicy bread from the Middle East. The tradition of making decorated gingerbread houses started in Germany in the early 1800s, perhaps as the result of the well-known Grimm’s fairy tale “Hansel and Gretel”[ in which the two children abandoned in the forest found an edible house made of bread with sugar decorations. Bakers offered these at Christmas, a tradition that came to America with Pennsylvanian German immigrants.

Now you will see them at resorts, museums and hotels across the country, as well as all varieties of kits to make the construction easy.

You’ll see them in San Francisco at the historic Fairmont and St. Francis hotels.

The Omni Grove Park Inn in Asheville, North Carolina, hosting its 30th Annual National Gingerbread Competition (all entries will be on display throughout the holiday season (@omnigroveparkinn) and Instagram (@omnigrovepark), the first 12 days of December.

The grand prize winner, Ann Bailey, was competing for the 11th time and had won three times before. Coble Adams, won in the 9 to 12 age group with “Santa Yoda and His Baby Elves while Maisy Frahler won in the 5 to 8 age group category with “Christmas Morning Paper Dolls; The first-place teen (ages 13 to 17) was won by the Rhinehart Girls’ “Fairly Tea House.”

The Museum of the City of New York will display the winners of: The Great Borough Bake-Off — the first ever.

In Colorado, The Broadmoor’s annual gingerbread display has arrived and can be found parked in the resort’s main building mezzanine. This year’s display has wheels – a vintage car made of gingerbread and chocolate, paying homage to The Broadmoor’s founder Spencer Penrose and his 1937 Flathead V-8 Cadillac Touring car, which was used to ferry guests on sightseeing excursions around Colorado Springs. In case you are wondering, the gingerbread car took two carpenters and 10 pastry chefs some 308 “elf hours” to create.

Said Craig. “The most important thing is to have fun.”