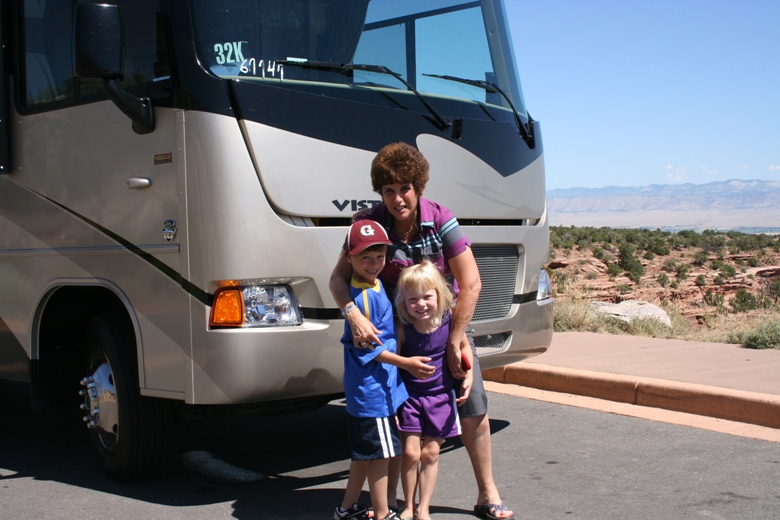 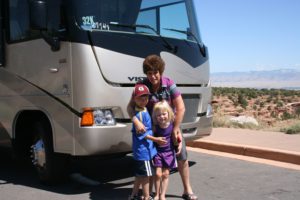 Eileen with Ethan Hannah and RV on the road in Colorado

The 32-foot Winnebago RV is stocked with every variety of food from Costco as well as toys, games, movies, pillows, sheets, towels, special “blankies,” and stuffed animals, along with two kids, 5 and 7, two parents and me.

“The most awesome day of my life,” declares my 8-year-old cousin Ethan Sitzman who pronounces the RV “so much funner” than a road trip in the family SUV.

I’ll say. Our home away from home as we tour southwest Colorado is a Winnebago (www.winnebagoind.com ) that comes equipped with flat-screen TV, bunks for the kids complete with individual DVD players and curtains, stove, fridge, bedroom for the parents, sleeper sofa for me, bathroom (hot showers are no small thing on a camping trip) and more cabinet space than my first NYC apartment (www.gorving.com ).

Not exactly an old-fashioned camping trip but an outdoor adventure just the same. “You are still sitting around the campfire whether you have an RV behind you or a tent,” said Tom Garland, a dedicated RVer, RV park owner, along with his wife, Mari, and president of the Colorado Campground and Lodging Owners Association (www.campcolorado.com ). “You only miss as much of the outdoors as you choose.”

At every campground, the kids make instant friends to throw a baseball or play with at the playground. Yes, a lot of campgrounds these days have playgrounds as well as organized family activities, splash pads and pools.

“Absolutely the best family time,” offers Dan Schweizer, a Kansas farmer who beds down with his wife and three kids in their camper, just as his parents did when he was small. “The close quarters bring you closer together. At home we are all going in separate directions and here we are together.”

The RV industry is celebrating its 100th anniversary with a season that has seen an uptick in sales and interest from renters, likely because RVing is an economical way to travel. The industry estimates there are as many as 30 million RV enthusiasts on the roads today. And while we think of RVers as retirees, the reality is that more recreational vehicles are owned by those between the ages of 35 and 54.

Every aspect of the trip is an adventure for the kids — the drive (we don’t have to stop if someone needs the bathroom!), the sights we see along the way (www.colorado.com ) — dinosaur exhibits in Fruita, Colo., the Museum of Western Colorado (www.wcmuseum.org ), the 23-mile loop road of the Colorado National Monument looking for faces and shapes in the astounding multi-colored rock formations that preserve a grand landscape of the American West, the train ride through the wilderness on the Silverton & Durango Narrow Gauge Railroad (www.durangotrain.com ) and Mesa Verde National Park where we explore the ancient cliff dwellings (more about that in another column).

It’s so much easier than tent camping with kids (especially when it rains). The Muellers, engineers from Denver who parked their brand-new RV in the spot right next to ours at a campground in Ouray, Colo., agree. “It took so much time to pack and unpack and we were spending all of our time doing that instead of relaxing,” said Erica Mueller.

“You could never clean up the tent,” adds Daniel, relaxing in a hammock he’d strung in the trees as the kids played nearby.

The stove and fridge makes it easier to cook for a child with food allergies too, adds Erica Mueller. “True camping with kids was more work than it was worth,” she said. “This gets the kids outdoors away from TV and the computer with a lot less work for us.”

All that and plenty of bang for your vacation buck too. One recent study shows that a family of four can save 21 percent to 67 percent on travel costs by using an RV. Figure on spending about $1,500 a week to rent an RV. A Typical 700-mile trip costs about $315 for fuel and $200 for the campground, so you can get away for a week for $2,000 — not bad these days.

Maybe that’s why RV rentals were up 12 percent last summer, according to the Recreation Vehicle Rental Association (www.gorving.com ). Reservations at Kampgrounds of America (www.koa.com ), meanwhile, are up 11 percent from last year. KOA welcomed some 20,500 camping families at its 475 campgrounds on Fourth of July weekend — making July 2 the largest single registration day in the company’s 48-year history — this at the time when hotels and resorts continue to struggle to attract families wary of vacation spending.

But it’s not only about the money. Jamie and Heather Shambarger, traveling around Colorado from their Utah home with four kids between the ages of 2 and 15, say they can well afford to stay in resorts but choose not to. “In a hotel you take them from a house to another room. What fun is that?” said Heather. “How can you experience the outdoors from a hotel room?”

Just as important, Jamie Shambarger said, is the chance for kids to meet kids from all over the country. And while the kids play, the parents socialize too. That rarely happens in a hotel, the Shambargers say. “And I’m not apologizing 400 times in a restaurant for their behavior.” Not that they are bad, he adds; they are just active kids.

Thanks to our RV, meals are fun rather than an ordeal. We picnic for lunch and make dinner for the extended family traveling in tandem — some in tents at the same campground, some at a hotel.

We end the night with s’mores around the campfire — making one after another until the chocolate runs out. Call me a wuss but when it was time for bed, I was glad for the air-conditioning.

(For more on Eileen’s RV adventure, read her Travel Diaries)