Scavenger hunt in the Doges Palace? Why not? 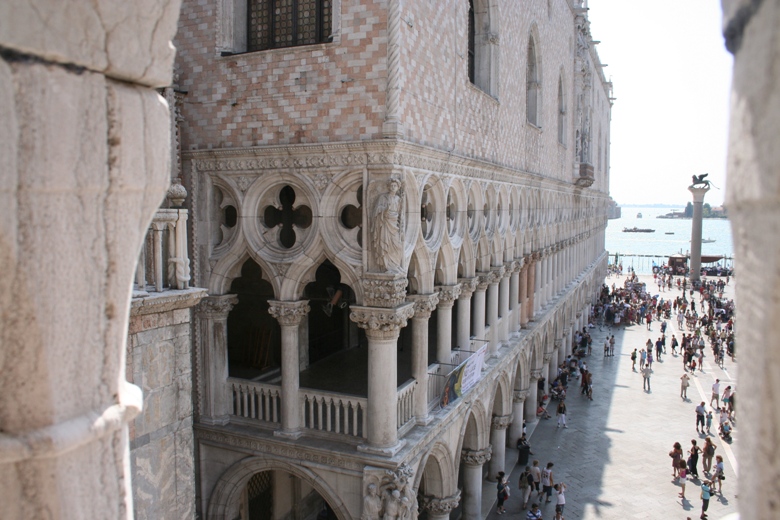 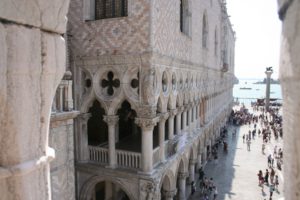 Ready for a scavenger hunt?

You wouldn’t think Venice’s Doge’s Palace—arguably the top site in this city along with the Basilica San Marco—filled with centuries-old art would be a good place for a scavenger hunt but it is.

We’re joined by guide Luisella Romeo who says with kids, it is important to “pick and choose what you see.  “You can tell them all the dates and the history,” she adds, “But they won’t remember any of it without the stories.”

Make believe we are ambassadors, she suggests. Where do we want to come from? And let us enter the palace as we would have to meet the Doge, the titular head of state. We climb the Giant’s Staircase—so named because or the statues of Mars and Neptune. We love the room with the with the globes and painted maps of the world as it was known 500 years ago. Kids will love that America not only is upside down, but mostly unknown while there is much more detail about China and the Middle East.  Venice after all, was home to Marco Polo and a trading center.

Look for the portrait of the Doge where there is a black cloth in place of a man—that particular Doge was accused of betraying the state and had his head chopped off.

The Doge’s Palace summarized the entire history, politics art and institutions of the Venetian Republic. It was at the same time, a home for the Doge and his family, offices of the State’s political life and courts. It was as if our guide tells us, the White House, Supreme Court and Congress were all in one building—and one that is 1200 years old!

Venice, we learn, was a very tolerant place and preferred diplomacy to war… makes sense in a place that thrived on trade and had citizens from around the world.

Check out the Golden Staircase!  The ceiling is 24 karat Gold!  The whole idea was to impress those who visited. You can’t help but be impressed by the frescoed panels leading upstairs with all of its gold leaf. Can kids find the carved bowl of fruit? The masks of imaginary animals?

Check out the Great Council Room—one of the biggest in Europe and bigger than an Olympic swimming pool where Venetian nobles met. When King Henry III came, 3,000 guests came for dinner.

Tell kids to look for the special secret mailboxes… there are 72 of them these are where citizens would list allegations—of someone cheating them of money, for example. And the judges would decide if you were right or not… and if your accusation was proved wrong, you’d be punished.

Speaking of punishment, you can walk across the famous Bridge of Sighs where it is said prisoners would get their last view of freedom before incarceration. We see cells with prisoner’s graffiti dating back to the early years of the 20th Century (these cells were used until the 1920s).  ”I’ve been accused of being a pickpocket,” one prisoner wrote on 9-10-1920.

Book a special tour, Romeo says, (though not in the summer), and you can see torture chambers and more. Try to imagine, she says, what a busy, busy place this was in the 1500s.

Kids will love the armor (can they find one designed for a child?)  Have them look for the weapon that was used to trip a horse and then kill the enemy rider… and then look for the famous Taking of Constantinople by Tintoretto… Kids will especially like the Battle of Zara also by Tintoretto and his assistants with arrows flying.

“Kids get the idea of this place,” Romeo says— to impress and welcome visitors with dungeons and torture chambers hidden.

She talks of Marco Polo–how his father and uncle took him with them when he was only 15 so he would appreciate the greater world—just like kids today who have traveled to Venice.  Allison Kojima, visiting with her family from Seattle says she loves Venice “because there are no cars just boats.” And there are all the novel touches—like hanging her laundry outside the windows of the apartment where her family is staying… just as Venetians do.  And of course there is the gelato!

Next door, of course is the Basilica of St Mark and a place for a gelato break before visiting the church. A tip: either book ahead online or go with a guide to avoid lines that can stretch for more than an hour. Kids can’t help but be impressed by the shimmering gold mosaics—they took 400 years to finish and cover 91,000 square feet!

We see evidence of Venice’s flooding problems first hand… it is high tide and water seeps into the church.

There is the story here—told in mosaic–of how Venetians supposedly stole St. Mark’s bones from Egypt, hiding them in pork (the painting even depicts the inspectors holding their noses), but then the church took so long to finish, they forgot where the bones were hidden.  Then a miracle occurred when a crack opened in a wall appeared revealing the bones. But it is all legend, our guide says and the tomb is actually empty.

Go upstairs to the balcony where they can get close to the mosaics and more important, see the famous horse statues stolen from Constantinople. They are 1600 years old and look so real.

Certainly touring ancient sites isn’t easy with kids… especially when it’s hot. But a scavenger hunt and some crazy stories (stealing bones!  Torture chambers! Hidden doors in the wall of the Doge’s Palace!) can make all the difference.