Seeing the Roman sights with Rita Clemens of Minnesota 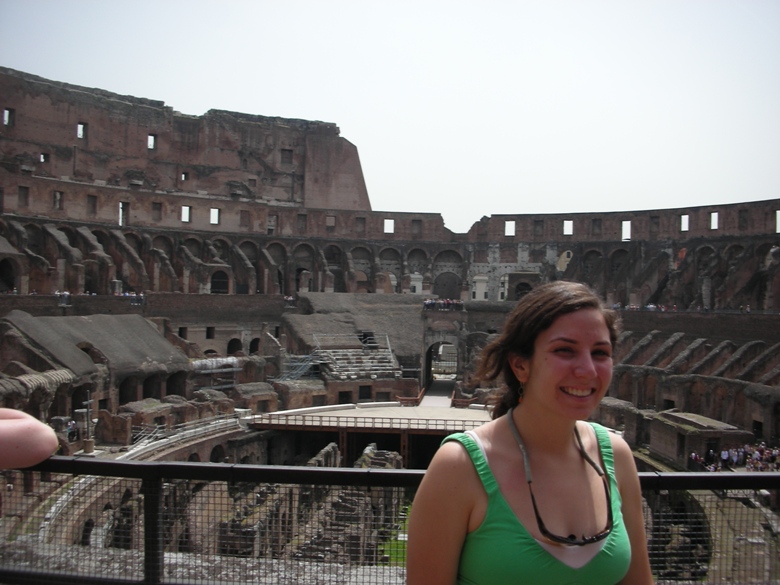 DAY THREE — We meet up with Rita Clemens , the friendly Minnesotan, who organizes trips to Italy for Americans (www.customizeditaly.com). She loves Rome, her adopted city and wants us to love it too. She says the biggest mistakes American families make when touring Rome is trying to do too much. “One thing a day is plenty,” she says.

Another tip — if you can afford it (probably $100 an hour) — would be to have a car and driver, at least for part of a day touring. There’s nothing like getting out of the heat and into an air conditioned car and not be worried about finding your way in a strange city with a couple of tired kids in tow.

Booking with an American company like Clemens’ has an extra plus — you can book tours in U.S. dollars. If you are cruising in Europe — as many families are these days — note that Clemens says for less than cruise land tours, she can customize a tour for your family and guarantees she’ll get you back to the ship in plenty of time. “And you won’t be walking around in a group of 50 people,” she says. “The goal is to keep the young ones happy,” she adds. To that end, she’ll arrange neighborhood tours with emphasis on the best gelato and pizza, she’ll stage museum scavenger hunts and she’ll make ancient history come alive with tales of gladiators fighting lions “You have to be super flexible with the kids,” she says. . If you ware in the middle of the Coliseum and someone is hungry and really wants a gelato we go get a gelato!”

Sounds good to me.

A few other tips: if you want to tour St Peter’s on your own, go late in the afternoon and avoid Wednesdays unless you want to be there for the Pope’s audience. Get together a group of eight and you can book a VIP tour for $850 — worth the price not only to avoid the long lines but also for the guide’s expertise.

We tour the Coliseum and the Forum, and stop at a cat sanctuary — that’s right — Romans it seems are crazy for cats and several years ago, all of the stray cats were picked up and brought to the Torre Argentina Cat Sanctuary, a no-kill shelter for homeless cats (of which Rome has many) that’s set amid ancient Roman Ruins at Largo Argentina. http://www.romancats.com/

Visiting the Coliseum is amazing, especially when you consider how modern stadiums are modeled on this ancient one. VIPS still get ringside seats. There are still many levels and many entrances. Stars were revered by fans. Of course, Clemens jokes, if one of today’s top athletes has bad day, he simply goes home. Ancient Roman gladiators fought till the death.

Boys especially, she says, loves hearing about the gladiators — and for a few Euros, posing with the “gladiators” outside.

“Just imagine 60,000 or 70,000 people here,” she says, “People yelling and cheering, eating and drinking.” Sounds a lot like a modern day football game to me!

Later, Rita takes us to the Campo de Fiori outdoor market. All those pictures we see in guidebooks — vendors selling everything from embroidered dishcloths to balsamic vinegar, olive oil, dried fruit (papaya anyone”) and gorgeous berries, peaches and vegetables (artichokes or eggplant maybe?) often are taken here.

Once the market is over mid afternoon, the Piazza Navona becomes a different place with cafes, restaurants, musicians and street entertainers.

A great scavenger hunt for kids: Look for the SPQR symbols everywhere — on manhole covers, buildings, etc. It translates to “The senate and the People of Rome.” Bring little girls up to Rome’s city hall on weekends, Clemens adds, where they can watch bride after bride in all of their finery.

We stop at the old Jewish Ghetto — surrounded by ancient Jewish ruins and where Jews have lived since the 1500s. Today it is a swanky neighborhood, albeit one with kosher restaurants and bakeries. We adjourn to Trastevere for a perfect Roman lunch sitting outside in the square at Ristorante Galeassi in the Piazzi S. Maria. Did I mention they are filming a movie nearby?

Why does food taste so much better here? A woman from the next table overhears our conversation about Chicago and comes over to say hello…We order a second bottle of wine…

It’s one of those days I don’t want to end. We’re so tired from sightseeing — and full from lunch — that we forgo dinner for cheese, bread and wine curled up on the couch in “our” apartment (www.italy-accom.com)
We feel like Romans — for a night anyway == as we go to sleep hearing our neighbors chatter, a baby crying, a woman rattling plates in her kitchen.

But there’s just one problem — I realize as we drift off to sleep. We’re leaving Rome tomorrow and we forgot to go throw a coin in the Trevi Fountain!