SKATEBOARDING WITH A CHAMPION 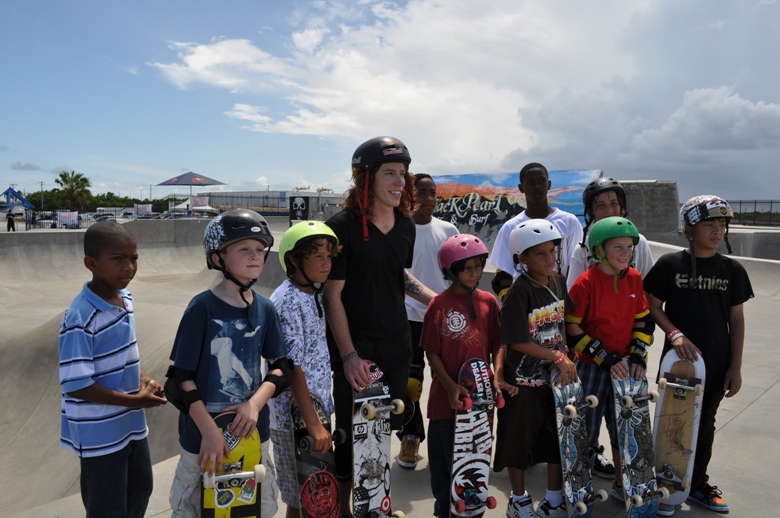 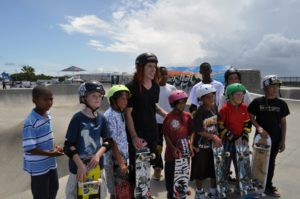 Shaun White with his students in the Cayman Islands

That’s because they’re going to skateboard with Shaun White — really.

Douglas Cameron, the Canadian who manages the park and oversees the camp — just in its second year — says it’s as much for local kids as visitors. It has 64,000 square feet of ledges, boxes, v-hips, banks and stairs and half pipes, which to the uninitiated look like a lot of hills built into the cement. But to the kids and the pros, it’s a place to learn and to test their mettle. Even for guys like Shaun White, winner of numerous medals in the Olympics, X-Games and other competitions.

“I can come here and be challenged and so can a beginner,” White says. He’s glad to be here, he says, because not only is it an awesome park but he’s getting some time with his family — his mom, dad and sister. “Sweet, hanging out with my dad and snorkeling with my family,” says white, who made sure to take in one of the Cayman Island’s top attractions — Stingray City — where he snorkeled and swam with the sting rays as many families do when they come here. “It’s pretty wild to be here with the second biggest skate park in the world and vacation too. “Those stingrays were an unreal experience.”

“I want people to know that it’s a really family atmosphere,” says Cameron, adding that youngsters as young as four can sign on for an all day session ($65).

Teresa Morse, who is from Grayson, KY, tells me her family chose the Cayman Islands to vacation so 11-year-old Fenner could come to this skate park. “The camp was an added plus,” said Morse, snapping photos with an obliging White and her grinning son.

Single Dad John Seamons, vacationing with his two boys from Colorado, was just as enthusiastic — both for the opportunity for his 10 year-old and 14 year-old and the chance for some “grown up” time, confident that they were happily occupied. “When I heard about it, I signed up right away,” he said.

“It’s active and constructive, and that the kids get to interact with the pros is huge. They aren’t just watching them. They are hanging out with them.” There are counselors and instructors who make sure the kids drink enough water and apply sun screen, as well as the pros who offer tips — as White did, sometimes getting tips himself, he said, from local kids familiar with the contours of the park.

“This helps the kids to problem-solve ,” says local Constable Steve Myers, whose son Sean , 8, has joined the camp and is an avid skateboarder. Another plus: it provides an informal and safe setting for visiting kids to meet and get to know locals. “They get to understand and respect each other,” he says, “I enjoy watching them.”

And while the park seems dominated by boys, he adds that girls come too — to watch the boys as well as to skate.

If you get a “Splash Cayman Package”, two kids under 12 fly free on Cayman Air, eat free at island restaurants and get free admission to many island attractions including the skate park every afternoon at 3 p.m. (when locals say is the best time to come) Details on www.caymanislands.ky

Next door and also run by the skate park is a Surf Park that is one of only five in the world that simulates real surfing with 11 foot barrel waves (though they can be regulated for kids) and a kids playground with bouncy slides, castles and more. Cameron adds that his staff will customize a package for visiting families. “Just get in touch,” he says.

Steven Clark, principal of the Heritage School, is here to see Shaun White with a group of 11-14 year olds. His two sons are fans of the park too — as is he. “Obviously the exercise is great and the idea that they can express themselves. We never imagined we’d have such an amazing facility. The guys love it and it gives them a place they really feel they belong.”

Despite the heat, the kids at the Skate Camp and the locals here in their school uniforms — bright yellow and blue polo shirts — have eyes only for white and his tricks as well as perfecting their own.

White, despite an aching knee, is generous with his time, answering the kids questions. He’s the first of many pro boarders who will be visiting this summer.

Was he ever injured, they want to know?

When he was 11, he tells them, he broke several bones and had to go to school on Picture Day with two casts and two black eyes. They thought that was hilarious.

When did he start? When he was six.

Does he get nervous? Not really but his mom Cathy who is standing by listening observes that she can’t stand to watch him compete for fear he’ll get hurt.

He shows them some of his tricks and offers tips to those working on perfecting their own. “I hope I’m a positive influence,” he said. “I had older pros who were really nice to me,” he explained, adding he’s glad for the opportunity to do the same. “It is a reward for me. This isn’t generally what I do,” he acknowledges.

The kids seem awestruck. “He does such good tricks and he doesn’t get scared or anything,” says John McDonald,10, who admits he gets “kinda scared,” when he tries a new trick.

“It was cool meeting a professional skateboarder. You don’t see that every day,” opined 10 year-old Aliyha Nelson.

But then the pool beckons and White leaves. The kids at the skate park don’t miss a beat. There’s another trick to learn.

Next: Checking out the beaches of the Caymans