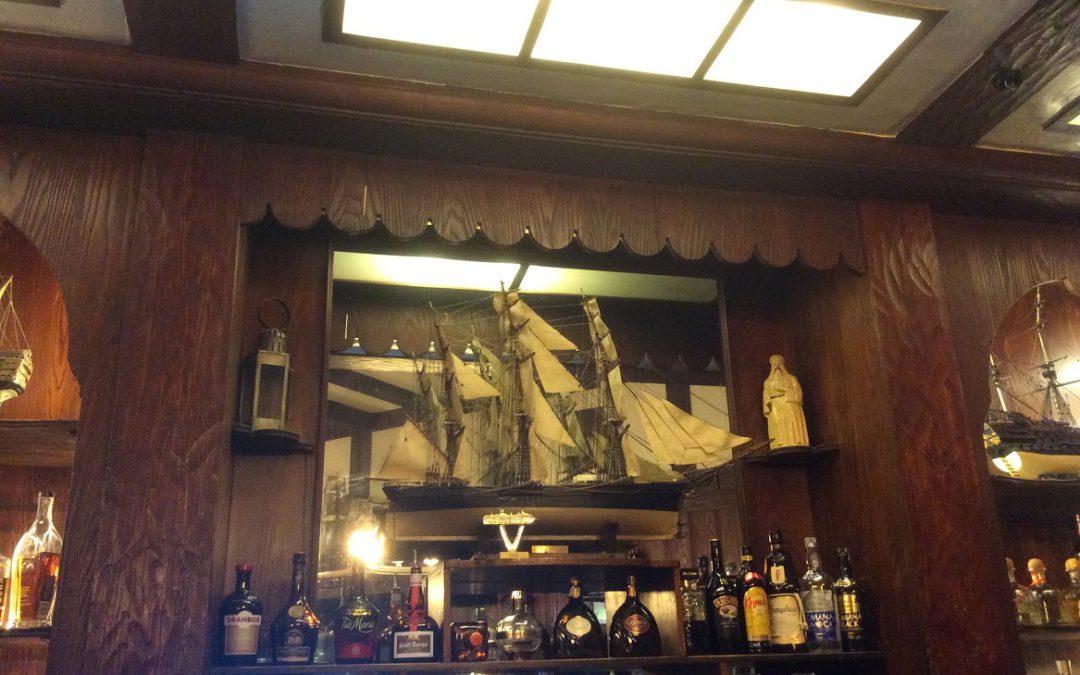 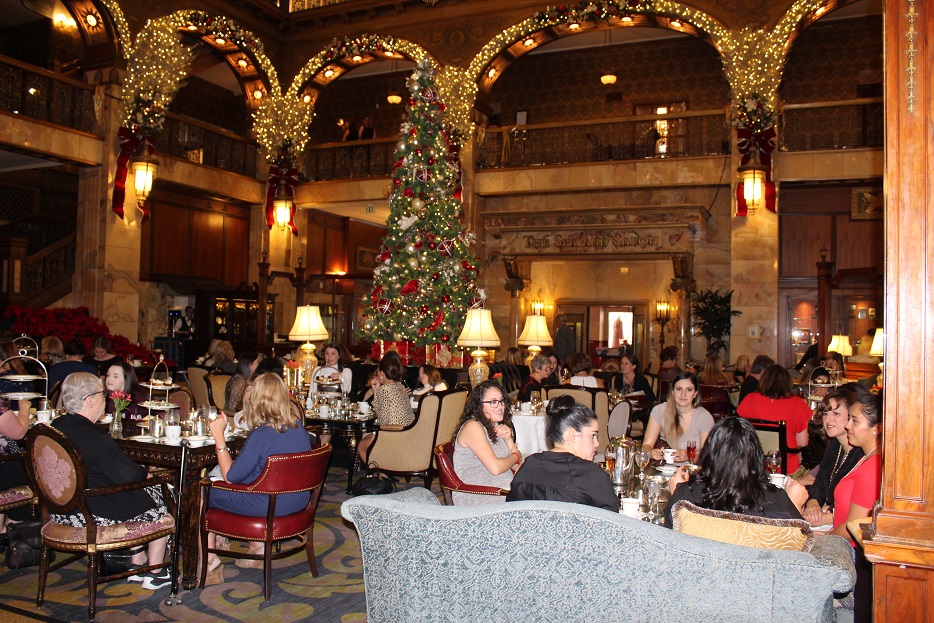 High tea in ornate lobby of The Brown Palace

For many Denver families, that includes a visit to the historic Brown Palace Hotel to see the extravagant Christmas lights, enjoy a sumptuous tea under the holiday lights or do Breakfast with Santa.

The Brown Palace has had a special place in Denver history since it opened  125 years ago. Henry Cordes Brown, a real estate speculator, donated 10 acres in the middle of his homestead parcel as the site for the new state capitol. He knew he could sell the surrounding lots at a premium, thus building his fortune, explained the hotel’s resident historian Debra Faulkner.

One of the first things you notice is the building’s shape—a right triangle.  That’s the result of two different early Denver street grids. Another thing visitors notice is the odd entrance—that’s because the grand entrance had to be reconfigured when the downtown streets became jammed with automobiles. 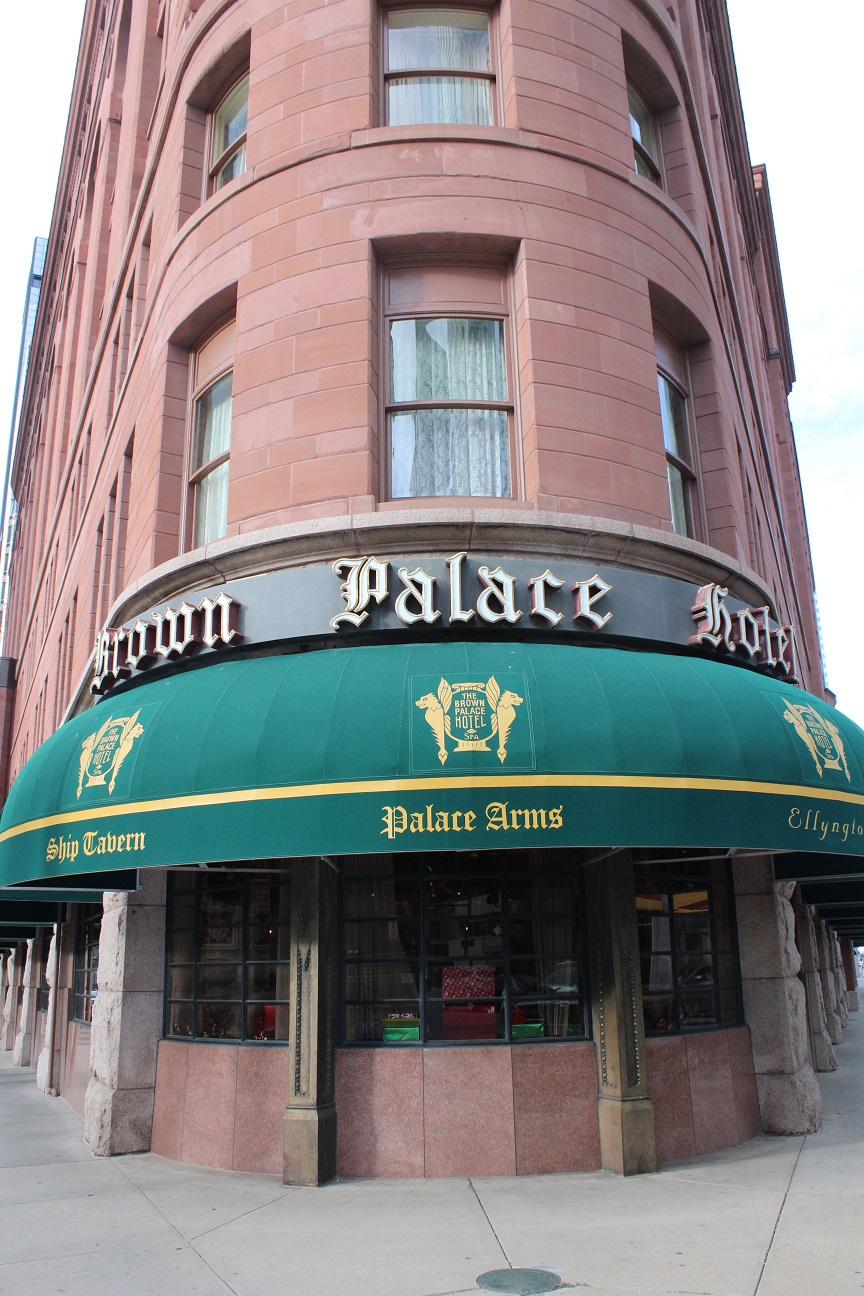 From the beginning, royalty, presidents and celebrities stayed here —The Beatles had to be smuggled up a service elevator when they were here to play a concert at Red Rocks in 1964, screaming teens surrounding the hotel. President Dwight Eisenhower stayed so often (his mother in law lived nearby) that his suite here was called the Western and Summer White House. He famously suffered a heart attack while staying here in 1955 (though he was stricken at his mother in law’s house).

Best Places to Travel to for Fall Vacations

Bulls and heifers have been auctioned in the lobby of the Brown Palace; champion Hereford  steers exhibited. The “Unsinkable” Molly Brown (no relation to Henry Cordes Brown) checked in 1912 after she survived the sinking of the Titanic, holding a press conference in the lobby to describe her experiences. Tom Thumb and Thomas Edison stayed here. To this day, Denver Debutantes are presented during the holiday season  under the famous 25 foot high holiday chandelier  with 250,000 crystal beads and 60,000 LED lights.

When the Palace was built, it was famous for its modern conveniences—electricity, flush toilets, elevators and hot and cold running water in each suite, thanks to the deep artesian well some 700 feet underneath the hotel.  The original stained glass skylight is 100 feet high.

“The more you know the history, the more impressive the hotel is,” said Faulkner, author of seven books on Colorado history.

Faulkner explained that many visitors (including us) wonder about the elevated walkway to the Holiday Inn Express across the street. At one point, that was an annex to the Brown Palace. Today, both hotels are run by the same management company so you can stay at the Holiday Inn Express and enjoy Brown Palace room service and other amenities. Good tip for budget minded visitors!

We had dinner in the Ship’s Tavern, so named for the beautiful scale models of New England sailing ships. Faulkner explained that the owner at the time, Charles Boettcher, impulsively bought the collection while visiting Cape Cod and thought his wife Jane could use them to decorate their mansion.  She was less than thrilled and suggested instead the new tavern — planned to celebrate the end of Prohibition in 1934 — have a nautical theme. 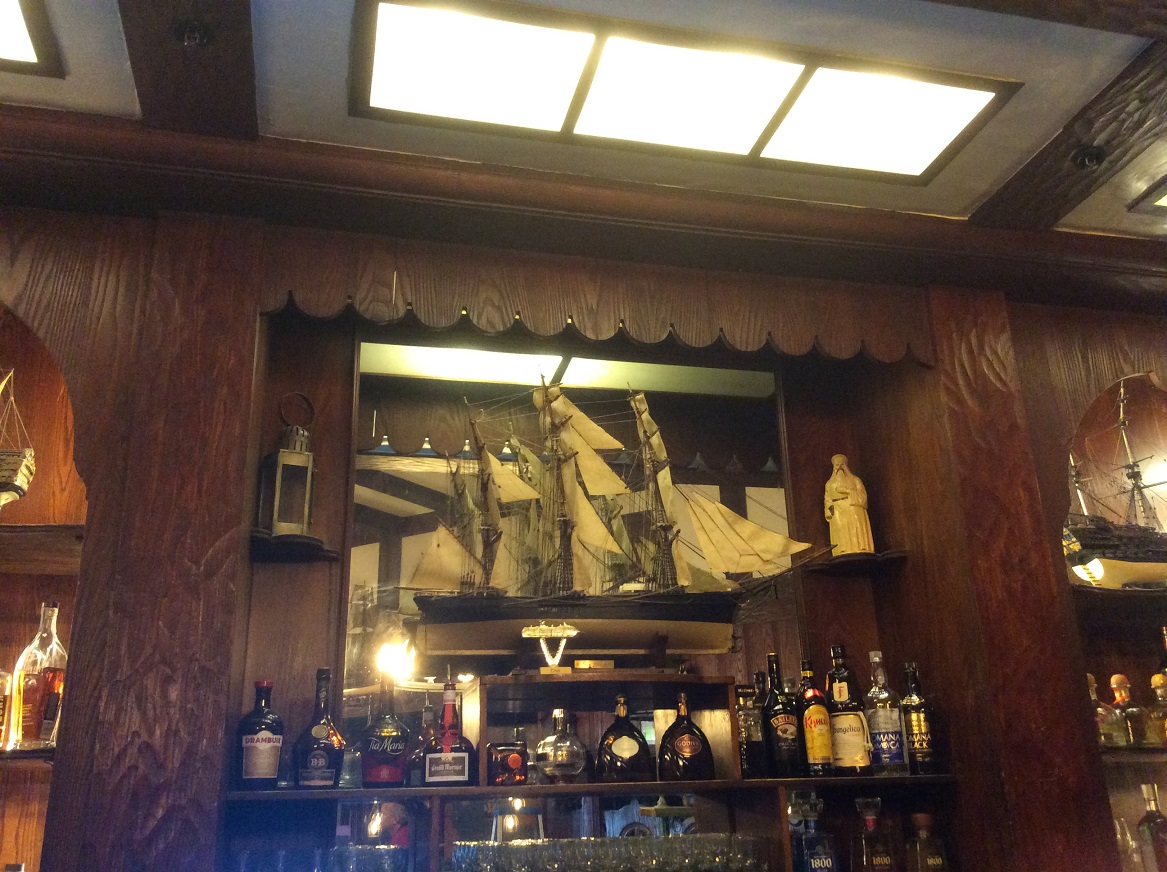 Today, the Tavern is famous for its Grand Manhattans and prime rib, which I can attest were delicious.  There are also plenty of local beers, buffalo burgers served with fries and onion rings (try the truffle fries),   Rocky Mountain trout and deserts including a Ship Wreck Sundae—vanilla, chocolate and strawberry ice cream, whipped cream, cherries, bananas, chocolate and  caramel sauce.  Yum!

And for the 125th hotel anniversary, try the 20 layer cake—chocolate and vanilla cake with dark chocolate mousse, raspberry marmalade and Ganache.   The kids’ menu includes mini burgers, a petit filet and a Lil’ Pirate Sundae.

Over 2,000 people opted for Thanksgiving at the Brown Palace, and just as many for Christmas and New Year’s Day, said Timothy Ralphs, executive chef. And holiday teas and special breakfasts are especially popular with large multigenerational groups.   When we arrived the Sunday after Thanksgiving, dressed up little girls and their moms were there for a special Sugar Plum Tea following a performance of the Nutcracker.

“Definitely a tradition for families to come every year,” Ralphs said. “They’ve been coming for decades.”

In fact, families book Breakfast with Santa (Saturdays between Thanksgiving weekend and Christmas) a year in advance.

As would be expected in a historic hotel like this, the emphasis is on traditional foods but with more healthy options. “Turkey with mashed potatoes and gravy but they will also want a quinoa salad,” he said.  For Christmas, the hotel is known for its prime rib with a huge variety of deserts.

One plus to these huge holiday buffets is that it doesn’t cost any more for kids to try a new dish as they can always get something else.

“Children’s palates in general are more adventurous and they’ve had  more exposure to  different foods,” the Chef said, noting that his own two kids are pretty good eaters.  “Kids are more adventurous,” he explained.  “Fifteen years ago, they might have stuck with mac and cheese and mashed potatoes but today they are eating kale salad,” and lots more with 60 different breakfast options including made to order omelets, a raw bar, carving station with the hotel’s famous prime rib, waffles with every variety of topping  and more than two dozen deserts.

For Breakfast with Santa, it is more about Santa than the food with traditional breakfast offerings and Santa and Mrs. Claus making the rounds of the tables for photos—think a Disney resort breakfast Denver and holiday style.  (Smaller kids’ buffet and the cost is $19.95 for kids five and under ; $30.95 6-12 year-olds; adults $40.95 ).  It’s not unusual to see large family groups of 20 or more, the Chef said.

Wherever you go to enjoy a holiday meal, he suggested, allow the kids to experiment.  Don’t ever say “you’re not going to like that! Kids need a chance to find out for themselves!” 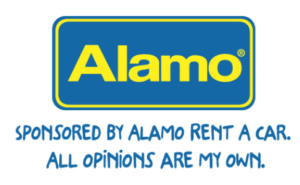