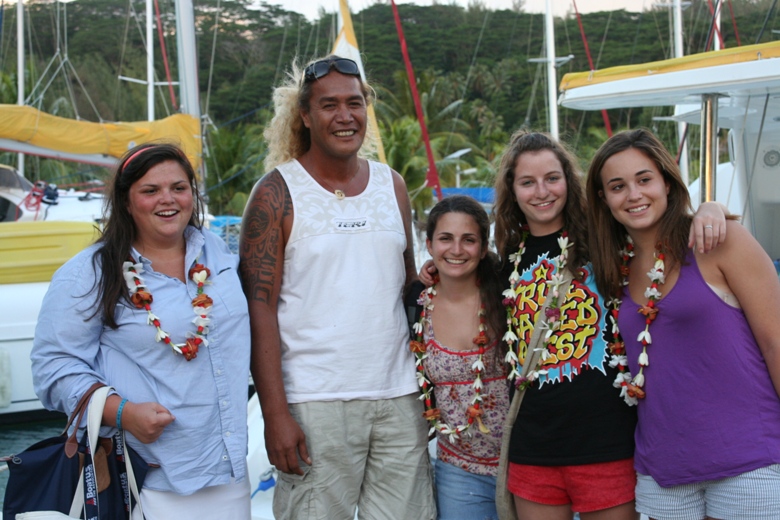 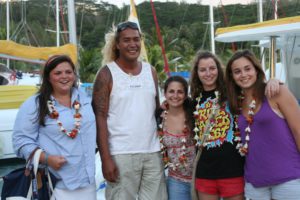 Sailing in Tahiti with Turo Ariito

It’s about the memories.

Remember that the next time you’re tempted to scold your impossible, uncooperative preschooler in the middle of Disney World or peck away on your Blackberry or iPad poolside instead of jumping in and playing Marco Polo with the kids or disown your teen who refuses to heave her hotel room and yet keeps complaining that she’s bored.

Of course traveling with children is stressful no matter what their ages and especially now as we wonder if we should have spent the money to go away at all.  And then the kids ratchet up the stress level by whining, complaining, and sulking.

But then there are those wonderful, albeit infrequent, I’ll-never-forget-this -thanks’-for-bringing-me moments. That’s why we need to keep Taking the Kids (and grandkids!)  Years from now, I promise, they’ll remember screaming themselves hoarse on that new roller coaster, their first time navigating down an expert ski slope, catching a  big enough fish to cook for dinner,   hiking up the side of a waterfall,  seeing a Broadway musical or Paris laid out beneath them  from the top of the Eiffel Tower.

My kids certainly do, though we’ve certainly had plenty of bumpy rides, missed turns, ear aches, ski injuries along the way. I was thinking of the trips that went right and those that went wrong as I perused our  Christmas Tree ornaments—the Eiffel Tower when I took my daughters to Europe right after 9/11 (we spent more time at the flea market than at museums); the moose-on-skis from Colorado (that was the trip when the kids officially declared me “too slow,” to ski with them); the canoe from Minnesota (when my five-year-old daughter trumped her older brother and caught a big fish for dinner); the Beefeater from London (when all my eight-year-old son wanted to do was  chase pigeons in Hyde Park); the  bear from Alaska and hula-dancing Santa from Hawaii (the trip when my  teen spent the whole time on his cell phone with a girl friend).

Certainly the trips never went as I expected or hoped.  But they were always memorable, especially when I let the kids lead the way. Whether the kids belonged to me or someone else, I realized — sometimes belatedly — that the best times were had when we took our cue from the kids and let their passions-of-the-moment dictate. It didn’t matter if I thought the coolest thing in the world was the chance to fish for salmon on Alaska’s famous Kenai River if the young teenage boy accompanying me didn’t want to get up at 4 a.m. Ditto for the special children’s tea with all of the accompanying frou-frou sandwiches at New York’s iconic Russian Tea Room, if the visiting 5-year-old girl was bored — and didn’t like tea. And then there was the trip to the deluxe Mexican Riviera beach resort that I thought my 22-year-old daughter would love. Unfortunately, my wilderness-loving daughter was bored silly lying around the pool, no matter how spectacular the setting, and pined for her boyfriend.

When I let the kids lead the way, I got to see places — even places I’d been before, like Yosemite National Park or San Francisco in an entirely new way. I did things I wouldn’t have otherwise, like shopping second-hand stores with my daughter in Sonoma’s quaint Healdsburg (www.healdsburg.com), riding an old-fashioned train with young cousins to the Grand Canyon (www.thetrain.com) or hitting a mall packed with locals in Anchorage with two eighth-graders (www.anchorage.net). There was another plus: Since the kids got to do more of what they wanted, they were more amenable to doing what we wanted — on occasion anyway. In the hopes that this will give you some ideas for your 2011 travels, here are some of my winners:

SAILING AWAY IN PARADISE. The key was sailing. The trip was a high school graduation gift for my daughter Mel and her three BFFs from Camp Kamaji in Minnesota (www.kamaji.com) who had spent every summer sailing together since they were nine. We opted for Tahiti (www.tahitiyachtcharter.com) — just a couple of hours farther than Hawaii we reasoned, and a trip of a lifetime for the girls. And it was, especially thanks to our Tahiti Yacht Charter Captain Turo Ariito, a prize-winning sailor straight out of a Gauguin painting — huge, muscular, with a long mane of hair. The father of teens himself, he had a winning way with the girls and took us to places we never would have found on our own — the best snorkeling spots we’d ever experienced, local festivals, a vanilla plantation and black pearl farm where his cousins gave us the 411. We got also got a chance to catch a huge mahi-mahi from our sailboat. Paradise isn’t always paradise when traveling with kids. This trip was.

GETTING UP CLOSE AND PERSONAL WITH A SEA TURTLE- Just a few feet in front of us on the dark, windswept  Costa Rican beach in the tiny village of Tortuguero,  the 300-pound Green Sea Turtle drops her eggs into a nest she’s dug deep in the sand—more than 100 eggs in just a couple of minutes!  Not many, we learn, will survive. It’s one of those I-can’t-believe-I’m here moments. Even the most blasé teens in our group– in the midst of a week-long Costa Rica adventure designed for teens  by Thomson Family Adventures (www.familyadventures.com)—are awed. There had been at least one thrill a day—holding a Blue Morpho butterfly, white water rafting, playing soccer with local school kids, horseback riding through a rain forest and communing with the monkeys in the trees right outside our cabins. There’s a lot to be said, I think for taking kids outside their comfort zone (no air conditioning! No TV! No cell service!), and seeing them navigate unfamiliar turf so well.  None of us will ever forget that mama turtle.

SKATEBOARDERS RULE. It’s vacation and the teens are up before 8 a.m. That’s because the two seventh-graders, both avid skateboarders, are heading to the world’s second-largest skateboard park — Black Pearl in the Cayman Islands (www.blackpearl.ky).  Come in summer for the chance to skate with pro skateboarders.  And though there were plenty of other attractions in the Cayman Islands (www.caymanislands.ky) — especially the famous Seven Mile Beach, and the spectacular pool complex at the Westin Casuarina Resort (www.Westin.com) — the boys opted for the skate park every chance they got. They were happy campers. So was I.

CALLING ALL JUNIOR RANGERS. The 5- and 7-year-old were excited by everything they saw at The Grand Canyon (www.nps.gov) — the fossils, the different colored rocks, the ravens and the mules we saw as we hiked a short ways down into the canyon — and that made us excited too. Nothing excited the two kids more, though, than their Junior Ranger badges, earned by a series of park activities (www.nps.gov/webranger). Their activity books kept them so thoroughly engrossed that we were able to enjoy an unexpectedly relaxing dinner at the historic El Tovar hotel with them. That trip made me realize that kids can get as excited about the outdoors and the spectacular sites in our national parks as they can about the latest video game or rollercoaster.