Memories of a sailing trip in the Caribbean 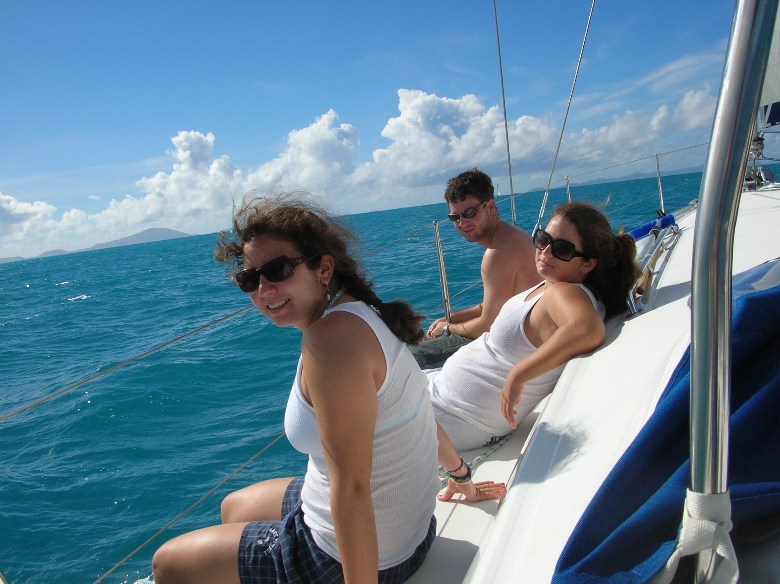 Everything changed that trip in one fell swoop.

My kids—aged 21, 19 and 14 at the time—decided after years of following us on vacation, it was time for them to  lead mom and dad on an adventure, they said (though they expected us to pay for the privilege, of course).

They were completely confident they could pull it off.  My son Matt had just spent a semester studying in Australia and then backpacked through Thailand, Cambodia, and Vietnam on his own.  My daughter Reggie just returned from three months in the wilderness, living part of the time in a Wyoming snow shelter as part of a National Outdoor Leadership School program. And 14-year-old Melanie had been crossing the country to go to camp, visit friends and relatives on her own since she was 9. That’s not counting all the adventures and misadventures around the world that we’ve shared.

Travel certainly has helped my kids and other kids we know to become the people they are: open to new cultures and places, able to handle unexpected obstacles, seeking out adventure wherever they go. I feel like telling parents that whenever I see them struggling with a rambunctious toddler on an airplane.

But was I ready to let my gang take over a family trip?  At least they couldn’t blame me if things went awry.

The kids’ pick: a week spent sailing around the British Virgin Islands. They would be captains, and we would be crew. Our kids had been sailing for years – my daughter Reggie even taught sailing one summer. And their choice was a good one. We’d rarely be out of sight of land (there are about 50 islands, some just mere specks of land, in the chain). There would be lots of beaches and little shopping (which pleased my husband). The area is a haven for sailors from around the world.

Still, were my kids good enough sailors? (They adamantly didn’t want to have a captain on board.)  Could the five of us survive on a 44-foot boat for a week? The charter company, The Moorings seemed satisfied with the “resumes” that Matt and Reggie sent, detailing their sailing experience. Besides, there was always the motor — and GPS. We were told that some people never raise their sails at all. And The Moorings would send out a “friendly skipper” with us the first morning just to make sure we were all comfortable.

Bare boating (boating without a hired crew) is easier and more affordable than you might think, and the cost is significantly less in the summer, especially if you join forces with friends or extended family. You can also hire a captain for part of your trip till you are more comfortable.

I knew what to expect from past sailing trips: cramped quarters, spectacular snorkeling and diving and wonderful white-sand beaches.

I took a deep breath, bought plane tickets and let the kids take over — mostly. While Matt looked at navigation maps, I concentrated on getting the boat provisioned for breakfast and lunch. We figured we’d eat most dinners on the islands where we docked for the night. My husband Andy made sure we’d have adequate refreshments on board. I scouted islands via the web, made a list of places where I thought we’d want to stop, and asked people who knew the islands to recommend beachfront restaurants — the kind you can motor to in a dinghy while wearing shorts, T-shirts and flip-flops.

“Relax,” the kids told me with a laugh.

There were glitches, of course. I forgot my good camera. Our connecting flight was delayed for hours. Some of our luggage didn’t make it from New York. But to my immense relief and surprise, Jet Blue managed to get the bags from New York to San Juan, then transfer them to Cape Air, which forwarded them to the island of Tortola. The bags were then delivered to our boat in the marina.

Finally we were on “our” boat, the Ginny Lynn, and the duffels and the food were stowed away. We could watch the sunset and see families like ours all around the marina, with teens and young kids alike. There were Americans, Germans, Italians, and Brits.

The next day, we headed to Norman Island, famous for all the treasure pirates supposedly buried there. But it was raining. Not just sprinkling, but pouring. It’s not supposed to pour in paradise. Finally, we resolved not to let the rain stop us, and we hopped into the dinghy to go to Treasure Point, where we snorkeled and swam in awesome underwater caves. When we’d had enough, we headed back to the sailboat for drinks and then got ready for dinner ashore at a burger place known for its party scene — except, to the kids’ disappointment, there was no party, though the burgers were great.

That’s the thing about a trip like this — there’s no telling exactly what will happen. There’s no schedule, no tour leader, no place to be at any given time. It was liberating.

Sure, we had our disagreements, but for the most part we got along fine. We spent more time together than we had in a year since our two older kids were away at college.

We jumped off the boat to snorkel before breakfast, introduced the girls to scuba diving (Andy and Matt already were certified), sailed into the wind, and feasted on lobsters that had been pulled from the water that afternoon just off the remote island of Anegada. We snoozed on quiet beaches and played Scrabble on the boat. We laughed — a lot.

By the second day, we knew the kids could handle the boat just fine. In fact, they were teaching Dad to sail in the process.

That’s not to say life aboard a sailboat is always a dream come true. I met a mom at The Bitter End Yacht Club, a resort on the island of Virgin Gorda known for their sailing fleet and welcome to sailors, who was desperate to get off the catamaran her family was sailing with friends. “This isn’t a vacation,” she said. She was desperate for air conditioning and a real bed.

Our last night, we headed to a tiny French restaurant in Tortola that’s a favorite among the locals. We brought the wine we had left on the boat and toasted our adventure. No one fell overboard. No one got hurt (though I did fall down the stairs once).

We were still talking to each other — even talking about where we might sail next.

The kids were right. They could lead the way—I just had to let them.