Snow day in Denver? Head up to Vail 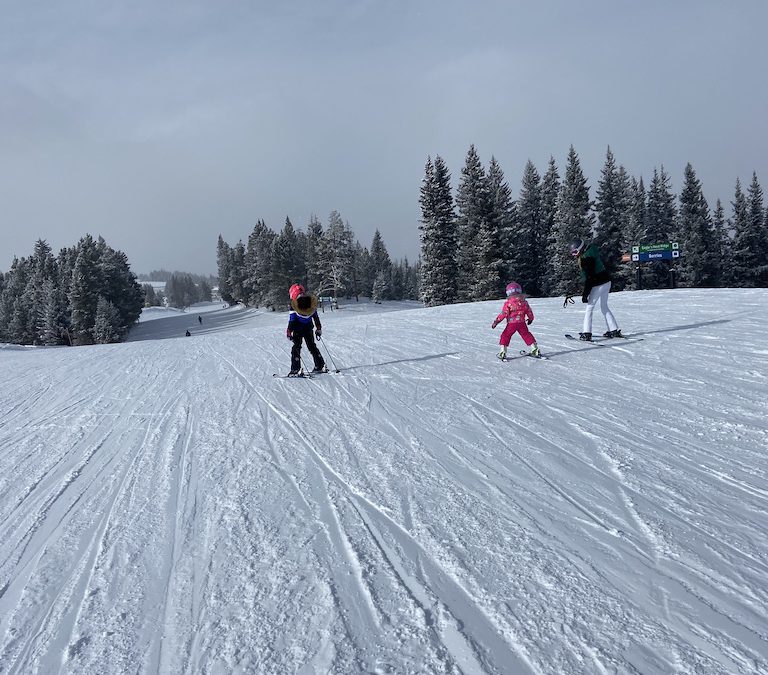 VAIL, CO — Ruby Gorden, 8, was having the best snow day ever. Denver schools closed for snow, so Ruby, her dad, and younger brother drove up to Vail to spend the day on the slopes.

She didn’t mind the two-hour drive, longer because of the weather. “Definitely worth it,” she declared. “We’re all having a snow day,” added her dad, Tucker Gorden.

VAIL, CO — Ruby Gorden, 8, was having the best snow day ever. Denver schools closed for snow, so Ruby, her dad, and younger brother drove up to Vail to spend the day on the slopes.

She didn’t mind the two-hour drive, longer because of the weather. “Definitely worth it,” she declared. “We’re all having a snow day,” added her dad, Tucker Gorden.

There are several resorts closer to Denver including Keystone, Breckenridge, Copper and Winter Park. But Gorden said his family prefers Vail for the variety of the terrain.

Teddy Gorden, 6, added that he’s a fan of the special Adventure Zones for kids.

Luckily, we’re not facing the drive home to Denver tonight. Instead, we’re staying at the Four Seasons Resort and Residences Vail where our skis and boots are waiting at the Ski Concierge in a building near the gondola at Vail Village. Not only that but the obliging staff buckles my boots and then carries our skis and poles the short walk over to the gondola. Wow! I could get used to this.

At the end of the day, I indulge in an excellent massage at the Four Seasons Spa that does wonders for my aching knees. “We are so busy,” said the massage therapist. “Everyone needs some R & R right now. The spa has hot tubs, but because of the pandemic, the steam rooms and sauna are closed. Before the treatment, I relax in front of a fireplace. I could get used to this too!

“I grew up skiing here, since I was two,” said Kathryn Blythe. She and her husband believe their investment in sending Ella, 9, and Dash, 7, to ski school here when they were small is the reason they are such good skiers today. In fact, Dash’s favorite runs are the hardest on the mountain “where I can jump off cliffs,” he said.

“They can ski what we ski. That’s a testament to the ski school,” said Kathryn Blythe. Certainly, it was an expensive investment, added her husband Justin, a former ski instructor and patroller. “But a lot better than when dad tries to teach them. They can’t whine and cry when mom and dad aren’t there.”

The couple added that they appreciate the Covid protocols, especially having to reserve an indoor table for lunch. “With kids you don’t want to be fighting for a place to sit down,” he said. “This is awesome,” he said.

But even some of those who love Vail aren’t completely happy this season. Just ask Inga and Rolf who have been coming from the Netherlands for the last dozen years, though they could ski a lot closer—and a lot—cheaper in the Alps.

“It’s so beautiful but they don’t have enough staff because they don’t pay their staff enough,” said Rolf. “That impacts the guest experience. I haven’t met anyone who works on the mountain who is happy.” Vail Resorts, he added, makes so much money, “Couldn’t they just pay their staff a few dollars more an hour?”

They lamented that the food should be better for the price ($15 for a cup of soup at the Wildwood BBQ; $7 for a hot chocolate at the top of the Eagle Bahn Gondola).

They still think they will return next season, but they are also thinking about Japan.

I was thinking about Inga and Rolf as we tucked into our delicious dinner at the Four Seasons Flame, a modern steak house. As had my masseuse, our waitress told us how much she enjoyed her job as she recommended some of her favorites (definitely honey cheesecake for dessert!)

“We have other options (scallops, lamb, elk, salmon chicken) but when people come, they want steak,” said Simon Purvis, the executive chef, who has brought some inspiration from his time in Asia and elsewhere to dishes including the crispy tempura avocado roll and grilled Spanish Octopus.

That’s evident at the popular Remedy Bar in the hotel, there’s a version of grilled cheese and tomato soup with fire roasted tomato soup. Plus an artisanal pesto and grilled cheese, burgers and impossible burgers as well as hot and sour soup, beetroot hummus, steamed edamame, and my favorite, an ahi tuna poke bowl.

There are kids’ menus at both restaurants. (Grilled cheese, Mac n’ Cheese, etc. as well as a 5-ounce NY Strip, salmon or grilled chicken breast.)

Portions were so large at Flame that the two of us couldn’t even finish one steak. Leftover morsels were appreciated by our dog Jake (the Four Seasons Resort and Residences Vail are dog friendly). We all will be thinking about that dinner when we are eating leftovers—just like our favorite runs at Vail.

The Blythes, from Asheville, SC, know that when they leave, there’s always next season. They plan to make a winter ski trip to Vail an annual tradition. Said Justin Blythe, “Vail is the best for families.

By the way, Vail Resorts is having a 96 Hour Sale from Tuesday, Feb. 8 through Friday, Feb. 11, offering travelers a limited-time opportunity to save on lodging rates across its portfolio of mountain destinations in North America,, with stay dates valid through the end of the year.