To Oahu Beyond Waikiki 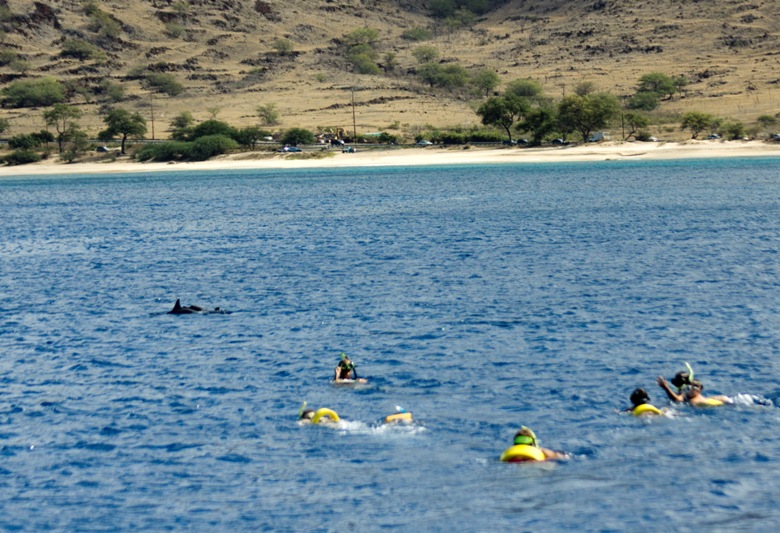 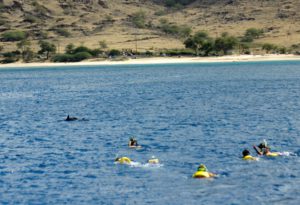 Snorkeling with spinner dolphins off Oahu

No, not a spa named after turtles — a spa for turtles.

We are just off the leeward coast of Oahu, a world away from bustling Waikiki near the Ko Olina Resort & Marina and the JW Marriott Ihilani Resort and Spa (http://www.ihilani.com/) where we are staying. Here, we’re snorkeling with marine biologist Tori Cullins and her crew at Wilde Side Specialty Tours (www.sailhawaii.com) at a spot where sea turtles return again and again to have fish clean them of sand and algae.

We look down 20 feet in the clear water to see three of the huge turtles getting their “treatments.” Afterward, one deigns to snorkel with us. “The best was my son tugging my foot and I turned around and there was a sea turtle three feet from me,” says an excited Cole Casey, an attorney from San Diego.

But meeting up with the turtles isn’t even the piece de resistance of this early-morning trip. Before the turtles made their appearance, we swam with about 30 wild spinner dolphins, as they raced around our boat. There are very few places in the world where you can do this, I learned later. The Hawaiian spinner dolphins feed at night and return to this area close to Hawaii’s western coast to play and rest.

We are warned not to touch them and advised to get into “the dolphin zone.”

“Just relax and take in the experience,” our guides urge us, asking us to be mindful of how our environmental carelessness can harm these magnificent creatures. We are so close we hear their high-pitched “conversation.” They seem oblivious to our presence.

“This is the best place for experiencing the ocean,” observes Cullins. “But nobody comes to this part of Oahu.

That may change a year from now when Disney opens its much-anticipated Aulani (www.disneyaulani.com), a Disney Resort & Spa in the Ko Olina resort community. We can see the construction from where we snorkel — and from the Ihilani Resort next door, which is already a haven for families and couples looking for something different. The Ihilani, a half-hour drive from Waikiki, is part of this manicured resort community that offers its own marina, golf course and pristine lagoons, ideal for young kids.

The name Aulani means “ a messenger of a chief” and was chosen to position the resort — Disney’s first in Hawaii — as a messenger of Hawaii’s spirit and culture. “Usually we make the stories, here we have been blessed to receive the stories of the Hawaiians,” says Djuan Rivers, vice president of the new resort.

If this place — 359 rooms (with additional two-bedroom Disney Vacation Club villas) spread out on 21 gorgeous oceanfront acres in the Ko Olina Resort community — is anything like Rivers and the rest of the Disney team promise, it will not only set a new standard for family resorts everywhere but will once and for all convince visitors that they should linger longer on Oahu (www.visit-oahu.com).

Certainly Waikiki has its charms — your teens especially will love the vibe, the shopping, the surf lessons and the food — we had great sushi at Doraku Sushi (www.dorakusushi.com) in the massive Royal Hawaiian shopping Center — and Pearl Harbor is just finishing up a big new visitor center that should be completed by the end of the year. (Check out special World War II Pearl Harbor and USS Missouri 65th Anniversary Packages now offered at the Waikiki Beach Marriott Resort www.marriottwaikiki.com.)

But I prefer the tranquility here — kids splashing in the big pool and in the lagoons with their parents at the Ihilani Resort, the first-rate, prize-winning Azul restaurant and fruity, frothy y concoctions — alcoholic and virgin — served to the kids’ delight in pineapples poolside. (Check out the Escape All-Inclusive Special www.marriott.com/specials/.)

You are closer here too to the North Shore with its quaint surfing town Haleiwa and famous beaches that attract world-class surfers in the winter.

But once the Disney resort opens — Mickey and Minnie will be tourists here just like your family — the hard part will be to convince your kids to leave the resort. There will be a 900-foot tube floating water course (a real water ride with “surprises” jumping out), a huge water playground for young children, sunset-facing hot tubs, snorkel lagoon, complete with peepholes so grandparents and parents who don’t want to get in the water can watch, a conservation pool, and more.

Airy, expansive Aunty’s Beach House will be kids central, offering supervised programs where kids can learn more about Hawaiian culture. (Rain will fall — yet another special effect before movies are shown.) A separate teen area will be adjacent to the 18,000-foot spa where, yes, there will be teen treatments.

Great care has been taken to interpret Hawaiian culture. There will be local storytellers, a live taro field and even lamps in the rooms that are fashioned to look like the poi pounders used to make the taro into poi, a staple of the traditional Hawaiian diet. On the water rides, you will think you are passing lava rocks. Canoes will “dump” water on the littlest visitors in a water playground. Spa treatments will feature local salt scrubs, lomi lomi Hawaiian massage and more. One restaurant AMA will — hopefully — make you feel as though you are in an ancient Hawaiian fishing village, complete with thatched roof.

Special excursions are planned so families can experience Oahu with local guides. “Think of Aulani as a portal to explore Hawaii,” Rivers suggests.

Or at least Oahu. We got another dose of the “other Oahu” when we ventured up toward the North Shore with Walter Keale Mix, the new ranger for the 1,463-acre Ka’ena Point State Park. Mix is an expert on Hawaiian history and culture and as we hiked toward the famed Ka’ena Point, passing the spectacular nearly deserted beaches, we met locals harvesting their own salt who were only too glad to chat with us about the practice.

Mix, who traces his Hawaiian ancestry back more than 1,000 years, encourages tourists to “talk story” with any Hawaiian they might meet — the woman cleaning your room, the waitress at the restaurant, folks on the beach. “I’ve seen many doors open like that,” he promises. “It comes when you least expect it.”

“You can get as much of Hawaii as you want right here on Oahu,” Mix promises. “You just have to get below the surface.”

For more on Eileen’s Hawaii adventure, read her Travel Diaries