Touring the historic LA sites with Adventures by Disney 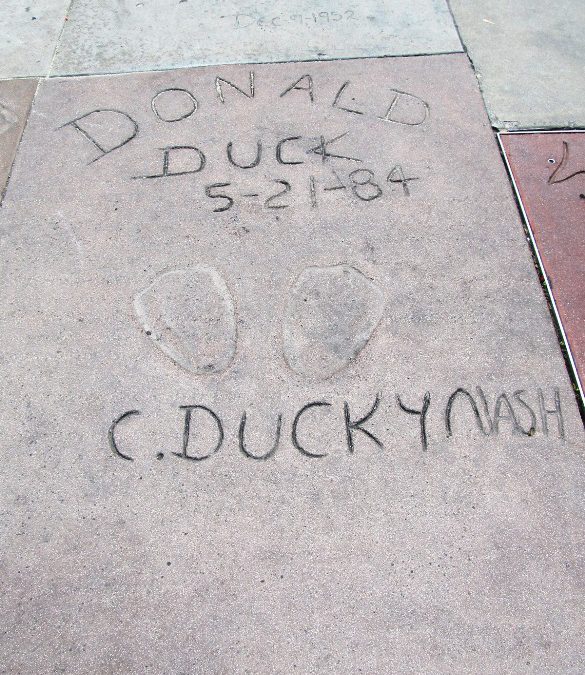 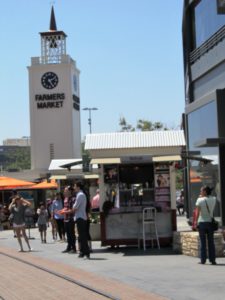 Farmers Market is ideal stop for lunch in Los Angeles

DAY FIVE OF FIVE — Taco or falafel? Oysters, a burger or crepe?

And those are just a few of the choices for lunch at the Farmers Market in Los Angeles, where there are over 100 shops and restaurants and where restaurants have been part of the mix since 1934.

But the history here  at West 3d Street   goes back  much farther. When Arthur Gilmore came west from Illinois in 1870, he became a dairy farmer here  at the corner of Third and Fairfax in LA.

At the turn of the 20th Century, he needed more water for his expanding herd, started drilling for water and found oil. Gilmore Oil Company went on to become the primary source of fuel in the West. Fast forward to the height of the Great Depression: Local promoters asked  E.B Gilmore —Arthur Gilmore’s son and now head of the business — if they could invite farmers to sell produce from trucks on the vacant land that once was the dairy farm.  That was the beginning of what has become a favorite LA spot for tourists, locals and celebs.

Do I want a fruit smoothie? A taco from Loteria taco?  A slice from Patsy D’Amore’s Pizza?  BBQ from Bryan’s?

I opt for a Chicken Shwarema sandwich from Moishe’s and then wander over to the Grove outdoor mall where actors working at nearby studios are known to take a break. I don’t see anyone I recognize and amble back to the waiting bus.

Yes, I’m playing tourist along with 14 others on a “Lights, Cameras, Magic!” tour courtesy of Adventures by Disney.

With the grand reopening of Disney California Adventure,  there is a decided effort to encourage visitors to see  Anaheim as more than a one-day trip. To that end, Adventures by Disney — which already offers a multi-day southern California tour—now touts this one-day tour ($199 per person) that includes Hollywood. Beverly Hills and concludes with a stop at the Walt Disney Studios in Burbank that aren’t open to the public.

“When I saw we would go to the studios I was sold,” said Tracy King, who is from Philadelphia and left her two young sons with her mom for the day so she and her husband Bill could enjoy that rare parents break on a family vacation.

The Theils, from Ohio, wanted to see the sights of Hollywood without the stress of navigating themselves. “We feel safe with Disney and we don’t have to drive and get lost,” said Tina Theil, here with her husband, sister-in-law and two kids.

And that is exactly the take away.  Our affable and informative guides Natalia Nunoz and Matt Eldapa take care of every detail — from handing out water and snacks to trying to figure out how to avoid traffic so everyone on board can relax and enjoy the sights. 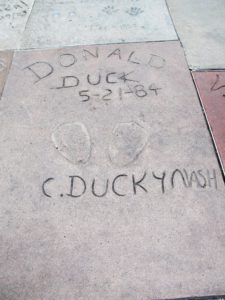 Our first stop— Grauman’s Chinese Theater  in Hollywood where we ogle all of the cement handprints of stars—everyone  from  Mary Pickford to the crew from  the Harry Potter films.

We learn the tradition likely started when Mary Pickford’s pup raced across a still-wet cement driveway at her mansion. She told the story to impresario Sid Grauman who decided this would be a great promotion for his theater. Pickford and her husband Douglas Fairbanks were among the first. Of course since then, famous stars from Cary Grant to George Clooney to Meryl Streep have left their marks. Let’s not forget Mickey Mouse and Donald Duck.

We went on to tour the Dolby Theater, long time home of the Academy Awards.  We walk up the same stairs the stars do and sit in the theater seats so coveted, we learn, that even Brad Pitt’s mom had to sit in one of the balconies.  Cirque du Soleil has a show here now. Diehard movie fans can enter a lottery for the right to bleacher seats along the red carpet. (www.oscars.org)

Our bus driver takes us on a quick tour through Hollywood History down the Sunset Strip, down Beverly Hills famous Rodeo Drive, past museum row to the Farmers Market and on to the Walt Disney Studios.  There is much in Los Angeles for families, whatever your interest.

At the Burbank Studios, we visit a Sound Stage – now used for TV — but where Mary Poppins was filmed.  We pass historic drawings in the original animation building for classics like Bambi and Dumbo and appreciate Walt Disney’s genius and drive. Our guide points up to where Walt Disney once worked.  I’m disappointed that we don’t get to speak with any animators or Imagineers who might work here now.

We end in Legend’s Plaza, a special garden where Disney employees have been honored with plaques and where there are Statues s of Walt and Roy Disney with Mickey and Minnie Mouse Our guides surprise us with cupcakes, snacks, drinks and framed pictures from this morning.

“If we had tried to do this ourselves, it would have taken us forever and been very stressful. My husband would have been driving and I would have been navigating and we wouldn’t have enjoyed it,” said Tina Theil.