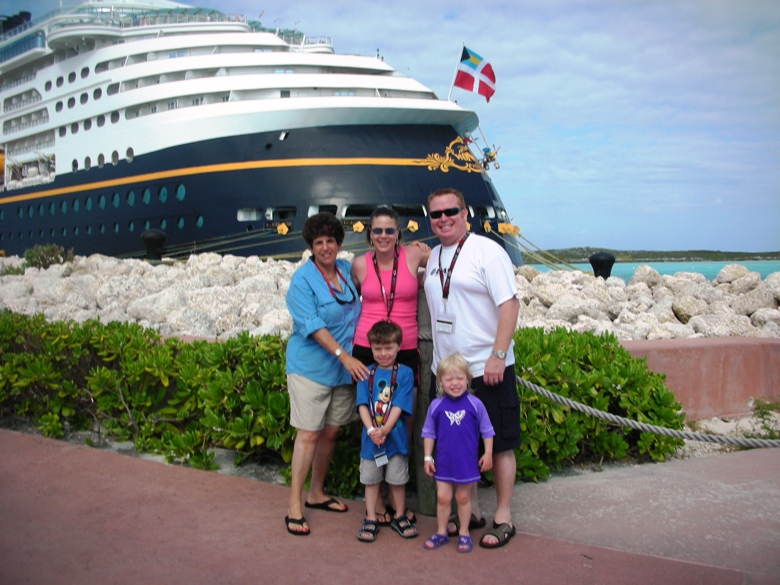 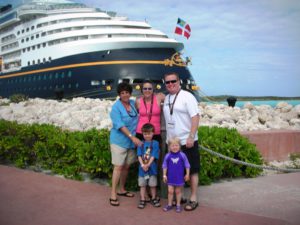 Eileen and the Sitzmans and the Disney Wonder

It’s well past the kids’ bedtime, but no one is nagging the preschoolers and kindergartners to brush their teeth and go to sleep.

Instead, they’re dressed to the nines (the girls anyway in full princess regalia) before heading to a poolside pirate party, complete with fireworks, to get up close and personal with Goofy and all of his pirate friends aboard the Disney Wonder. Others are busy in the shipboard Oceaneer Club playing the latest video games, watching movies in seats designed to look like clam shells and climbing on the pirate ship play structure.

All of this is after they’ve seen a brand-new Broadway-style show, “Toy Story: The Musical,” featuring all of their favorite characters from the popular film – some portrayed as 9-foot-tall puppets – and dined like royalty at dinner where the waiters not only knew their names but also performed magic tricks and were happy to get them anything they liked at no extra charge (a side of salmon with your chicken fingers . no problem!)

When my 5-year-old cousin Ethan Sitzman and his 3-year-old sister Hannah finally got back to their stateroom, they were thrilled that the steward, Pacifer Ticao, himself a young father from the Philippines, had fashioned a PJ Party with the kids’ stuffed animals and a monkey he had made out of towels. The kids truly thought they’d arrived in vacation heaven.

Of course, vacationing with young children isn’t always — well a vacation — for parents. Just ask Ethan and Hannah’s parents, Mike and Jayme Sitzman. (No one wants to get up to take a child to the bathroom three times before the main course is served!) But the families that recently cruised aboard the Wonder for three days agree that Disney Cruise Line (www.disneycruiseline.com) does all it can to ensure that the more than 1,000 kids onboard, 45 percent of them seven and younger — as well as the parents and grandparents (and more than half the cruisers are traveling with extended groups) have as stress free a getaway as possible.

They congregate at one of the three pools – did I mention it is shaped like Mickey Mouse ears – where there is a water play area just for toddlers a water slide, an ice cream stand, another for fruit and yet another for chicken fingers, pizza and burgers most of the day and evening. “I’m even relaxed watching the kids at the pool,” laughs Kalen Walker, cruising with her 7 and 5 year olds. “This really works.”

It’s the Disney difference, says the ship’s youth activities manager, Shannon Quinn, who overseas a multilingual staff of more than 50 counselors, all of whom come aboard with substantial experience working with children. They speak at least eight languages “and if we don’t speak it, we’ll find someone on the staff that can help,” says Quinn. The staff will also do all they can to provide one-on-one care when needed for special needs kids, she says, even logging their food allergies into the computer. Parents get pagers when they leave their kids in the organized programming, just in case they are needed. The counselors not only entertain the kids (a special staff orchestrates the activities with Disney characters), but also feed them lunch and dinner, if parents need a break. Because of maritime regulations, standards of cleanliness are higher than at many daycare centers. “We’re cleaning all the time,” says Quinn.

“I feel very comfortable that the children are well taken care of,” said Christy Tenczar, who is from Orlando and was cruising with her husband and 3-year-old son. “It’s hard to get him to leave!”

Other cruise lines (Norwegian and Carnival, for example) have programming for children as young as two, but Disney Cruise Line operates the only full-scale nursery at sea, taking children as young as 12 weeks, though at an extra charge, so that even new moms and dads can get a reprieve, possibly to head to the adult-only pool, the adult-only deck to hear some music or dance, the spa or Palo, the first-rate adult-only restaurant.

There is even an adult-only beach on Disney’s private Bahamian island, Castaway Cay where parents can steal away (cabana massage maybe?) while the kids, happily ensconced in organized programming, excavate a “whale” skeleton or hunt for buried treasure. Other families are on the family beach with the play structure anchored in the clear turquoise water, splashing on giant inner tubes and making giant Mickey Mouse ears in the sand, getting as much ice cream and soft drinks as their parents will allow. “The beach is the best part,” says Laurie Bosh, a Massachusetts mom of two young children who was cruising with her extended family to celebrate her dad’s 60th birthday.

There’s just one problem, adds Ken Phipps, Bosh’s dad. There’s so much to do, “You don’t want to take time to relax.” Take your pick: Besides all the kids’ programs, there are family activities all day (want to make kites, sing Karaoke or play Mickey trivia? Play ping-pong, watch a movie in the theater, attend a martini tasting or Pilates class. Work out in the fitness center? Did I mention the meals that never seem to end?

Even the cabins are thoughtfully designed for young families, featuring a bath and a half. It’s also possible to check in for your flights online, even having Disney personnel transfer your bags so you don’t see them till you arrive at home. The biggest draw, of course, is the characters who make appearances all through the day and evening – everyone from Pluto to Cinderella to Pirate Jack Sparrow and, of course, Mickey and Minnie. Pluto is on hand to give the kids a hug when they get back on the ship after visiting Nassau; Snow White teaches the preschoolers a dance, while Captain Hook gives the 5 to 7 year olds a lesson in becoming a pirate. Lilo and Stitch host a luau. Belle reads stories.

“It so much fun to see in their faces how excited they get when they see the princesses,” says Becky Bjerke of West Fargo, N.D., who’s cruising with three daughters under five. More than a third of those cruising on the ship are first-time cruisers — like my cousins — and many more, Disney Cruise Line officials say, are cruising for the first time with their kids. (A three-night cruise for a family of four starts at roughly $1,300 and there are many packages that include a stay at Walt Disney World along with a three- or four-night cruise.

This summer, The Disney Magic will sail out of Los Angeles on seven-night cruises to the Mexican Riviera, while the Wonder continues alternating three- and four-night Bahamian itineraries. (Sail four nights and you may be able to visit Castaway Cay twice.)

Our last night onboard, we dropped the kids at the Oceaneer Club and headed up to the, oh, so sophisticated adult-only restaurant for a Northern Italian feast. We toasted a successful trip. But just as the chocolate souffles were being served, my cousins got paged: The kids were crying. Goofy had arrived for a PJ party and the kids didn’t have PJs on. Even aboard the Disney Wonder, you can’t expect perfection with young children along – at least all the time.

“I wish we didn’t have to leave,” Ethan said the next morning.

I think a lot of parents felt the same way.