To the literal end of the road on Kauai 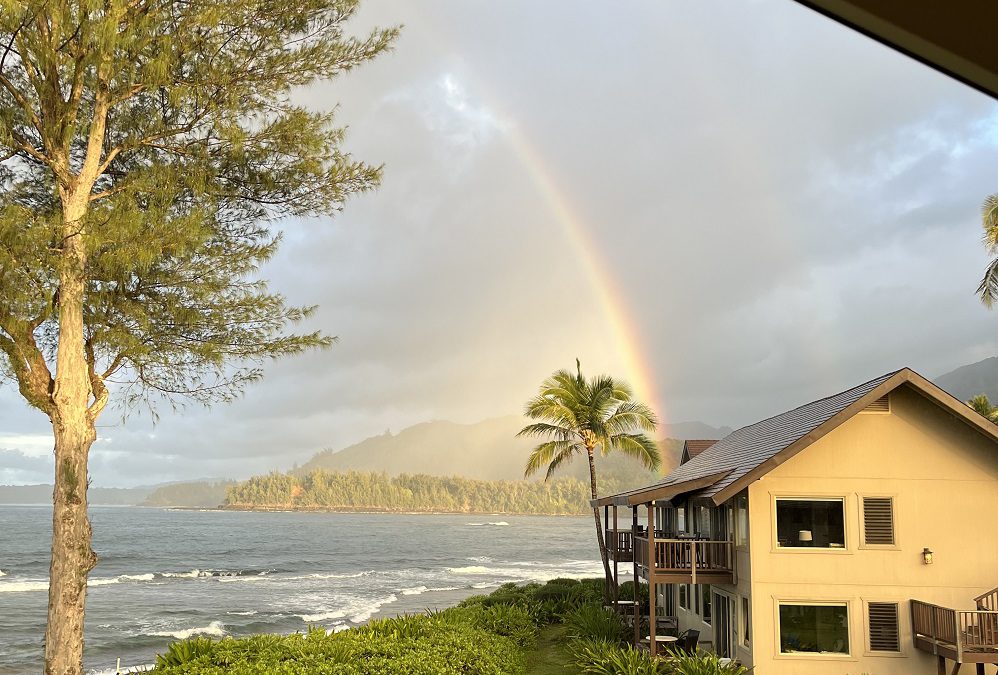 We’re nearly there at the Hanalei Colony Resort on Kauai’s pristine North Shore, famous for the drop-dead gorgeous Na Pali Coast. We’ve crossed several one-lane bridges and passed the tiny town of Hanalei with its mix of surf shops, shave ice stands, food trucks and restaurants. It’s a little more than an hour’s scenic drive from Lihue Airport, with mountains and taro fields on one side; the coast on the other. (The literal end of the road is just a mile or so past here at the world-famous Na Pali Coast State Wilderness Park).

I came upon this secluded 52-unit condo resort more than a decade ago when my daughters were hiking a portion of the famous Kalalau Trail. (These days, you need reservations to enter the park.) I’m glad I’ve had the chance to return.

“I love that you can basically disappear from reality here and have no stress,” said Kendal Naughton, a singer in her early 30s from Lake Tahoe, California, here with her mom who owns a unit here.

We were hanging out at the newly renovated pool and grill area set within a beautifully planted tropical garden, birds flitting around.

I think about what Naughton had said as I sat on our condo deck overlooking the beach and the wild, crashing surf. It is as unspoiled as it gets, the only oceanfront resort to the Kalalau Trail at Ke’e Beach. Many come out to experience the sunrise — and the rainbows after the rain.

This place obviously isn’t for everyone. It’s exceedingly remote, requiring a drive on the narrow roads over those same one-lane bridges to get groceries. The resort does run shuttles into Hanalei for shopping and dinner (it isn’t fun driving these roads after dark. Kilauea and posh Princeville with its famous golf courses are about 20 minutes away.)

“This is really a place for those who like to do for themselves,” explained Sue Grinnell, here from Olympia, Washington, with her husband, daughter, and 8-year-old grandson, Jalen, 8, who has been having a blast hunting for crabs, exploring tidepools, the koi pond, and the turtles in the creek. He’s also become a big fan of shave ice, especially raspberry and vanilla. For the uninitiated, shave Ice is a Hawaiian treat where different flavored syrups are drizzled over ice chips and served in a paper cone.

Kauai is alternately called the garden isle, or the adventure island. Actually, it’s both with 113 miles of shoreline, almost half with white sand beaches. Paddle board, or paddle an outrigger canoe, surf, snorkel, dive, sail (perhaps along the Na Pali Coast ) or sea kayak. Picnic at sunset, laze on your beach of choice or head to Lumahai Beach, the long, white-sand stretch where Mitzi Gaynor so famously sang about washing that man right out of her hair in the classic film “South Pacific.” You’ve likely seen other films made here, including “Jurassic Park” and “Jurassic World” (Kauai stood in for a fictional Central American island), “Raiders of the Lost Ark” (a South American jungle) and the “Descendants” with George Clooney (set here and on Oahu).

Play golf – there are nine courses to choose from.

A burgeoning food scene offers everything from food trucks to farm stands (Hanalei Colony Resort even offers an $100 credit for those staying more than four nights and who shop local) to gourmet restaurants (in tiny Hanalei Bar Acuda is so popular it books up months in advance for tapas).

Go hiking. Waimea Canyon, known as the Grand Canyon of the Pacific on the western side of Kauai, is known for its scenic overlooks and hiking trails, including the popular 3.4-mile Canyon Trail that includes Waipo’o Falls, an 800-foot waterfall. (Sadly, it was pouring when we visited.)

Enjoy spectacular botanic gardens — three of five National Tropical Gardens are on Kauai; Allerton Garden and McBryde Garden on the South Shore and Limahuli Garden in Haena. There are voluntourism programs that can offer hotel savings, as well as satisfaction for giving back. At the Grand Hyatt Kauai Resort & Spa, for example, the Malama package offers a fifth night free for guests who do a beach cleanup.

I was thinking about different strokes for different folks when we spent a few days after our stay at Hanalei Colony Resort on the sunny South Shore of Kauai at the luxe Grand Hyatt Kauai Resort & Spa. It is spread out on 52 acres with multi-level lava-rock lining a lazy river pool, complete with waterfalls and a 150-foot water slide. There’s a 1.5-acre saltwater lagoon with a sandy beach and plenty of white sand beaches, as well. The thatched-roof Tidepools is considered one of the top restaurants on the island and a new Hawaiian Cultural Center offers classes (lei making anyone?) while local artisans show off their wares in the lobby. Obviously, there’s no need to make your own Mai Tai or get your own lunch here.

“This is the best hotel I’ve ever been to,” said Baylee Cain, 27, here with her blended family. “My dad and his wife honeymooned here, and he wanted us all to see it,” she explained.

Families not only have all the conveniences but are the most likely to pay an up-charge for access to the Grand Lounge for complimentary breakfast, snacks and hors d’oeuvres, plentiful enough for dinner.

While at Hanalei Colony Resort, meanwhile, there is no AC (we don’t need it), and no TV or phones. You either want to arrive with a car full of groceries or arrange to have the resort stock your fridge.

At the Hyatt, of course, room service is a phone call away and you have a choice of where and what to eat (poolside fish tacos, maybe, or sushi?) not to mention all of the restaurants in Poipu Beach.

“Didn’t you get bored at Hanalei?” one Honolulu friend asked. Absolutely not.

“There is something about this spot (the ocean on one side, the misty mountains on the other reached by one-lane bridges) that is spiritual,” said Kendal Naughton. “You feel the energy and a lot of peace you don’t have on the mainland.”